Air, water and a bigshot

One of the perks of working at a university is the wide range of lectures you can attend. There's always something going on! In York I had already greatly enjoyed the Festival of Ideas, which included a reading by none other than the now late Seamus Heaney - I am glad I seized that opportunity! And this month there suddenly was a lecture by Han Seung Soo, who is not only a former prime minister of South Korea, and a special envoy on climate change for the UN, but also one of the first PhDs the University of York ever delivered. To his own surprise; he said that when he applied to do his PhD here he thought the university would be as old as the town. He would be in for a surprise. 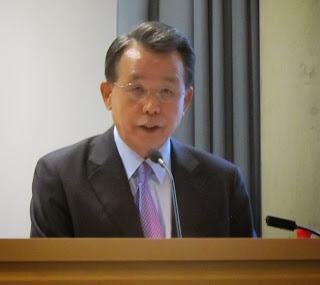 The topic of his talk was: Air and Water; free goods? And he sketched how both commodities had been taken for granted for centuries. These days, that won't do anymore. He didn't go too deep into the practical issues of irrigation, CO2 exhaust, political selfishness and such things. He went deeper into that these issues need to be tackled, and that the generation we are educating now will have to do the bulk of that tackling. And that it matters to not lock yourself up in the ivory tower, but to go out there and make things happen. And he could even have said "do as I say AND do as I do"!