Yes I went to Stamford Bridge. No I did not go to a football stadium. When I became aware of the existence of both the village near York and the football stadium, I thought the stadium might have been named after the village. Not because I think football clubs in national capitals are generally keen to name their stadiums after daft hamlets, but because this specific village is famous for the Battle of Stamford Bridge; one of the most famous battles in English history. You know, the one where the Anglo-Saxons managed to fight off the Vikings, and only had three days to enjoy that, as then William the Conqueror saw an excellent opportunity to extend his area of influence by landing his army on the other side of the country. And the rest (cliche alert!) is history.

So anyway. When Roland moved up he chose Stamford bridge, the village near which this famous battle must have taken place (although its seems that nobody knows where exactly that was) as his new home. And I would now visit.

I mounted my map on my bike, and set off. One of the regional cycle routes comes through Stamford Bridge, so I followed that. It's well-indicated, but it's not at all beyond me to miss a sign here and there so I kept a close eye on the map. On the maps I had noticed part of the route seems to go over footpaths, and it does! And by the grace of route 66 going over them they must have technically become cycle paths, but they sure don't look that way! I liked that. 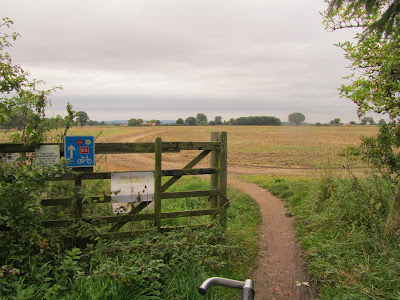 I reached the village rather punctually, and found Roland's house. His children opened the door for me. And Rosa immediately asked if I would watch "Horrible Histories" with her. Well why not! It turns out to be quite fun, and I thought they had a rather attractive Lord Sandwich in a sketch. And by the time they were done with all the blood and gore (the name is not a misnomer) there was just time for a tour of the house before it was dinner time. Jambalaya! Roland's favourite, and I can see why.And it was such a balmy day we dined in the garden!

After dinner Roland offered to show me the village. That sounded like a good idea. He showed me the Battle of Stamford Bridge monument, and the shops downtown, and the bridge that may or may not have been built on the location of a bridge that played an important role in the mentioned battle. And it's Roland, so he showed me the best of the three local pubs too. Nice beer! But it's a bit of a walk, and I had announced I wanted to leave early, as the day after we'd do a fairly die-hard caving trip. And I wanted to be fresh for that. So as soon as we got back to the house I packed my stuff. Time to find out if I could find the way home in the dark!

I kissed Maria and got hugs from the kids (Aart managed a well-pronounced "BYE BYE MARGOT"; not bad for a chap who's not even 2 years old!) and off I was. And finding the way home turned out to be very easy, fortunately. And the day after I would find out that was for the better; I'd need all the energy I had!
Posted by Margot at 16:32