Think of the average consumer, and then try to think of its opposite. Chances are, you're thinking of my mother! She doesn't like stuff. She's very good at getting rid of things. And she doesn't like eating. Or television. Not too keen on music either. Let alone films.

You can imagine it's not easy to think of a birthday present for someone like that. One could think of a book, but a book is stuff. And it's difficult to pick something that is a hit. I tend to just bring flowers. But I had noticed, during earlier visits, she had put up some more pictures of her children. So that gave me an idea! I'd take a picture of myself. It sounds very self-centred, but it was something I figured she'd really appreciate.

So then the picture. My house is a bit dark, so I had to either work by daylight, or come up with some form of artificial lighting. And I'm not home during daylight hours very often. So I experimented a bit; I figured I had to drag in the standing lamp from the lounge. And they were too low; I had to place them on a chest for increased height.

And I realized a portrait picture looks strange when taken from below, so I brought in a stool too, to place on top of the table, so the camera would stand high enough.I crouched for the final picture, but even so, the camera needed to be at height!

Then I realized that if you use the timer, the camera focusses on whatever's in sight when you're setting the timer, which by definition is not you. So you get pictures of a blurry person in from of a sharp wall. So I brought in a chair to focus on, and shoved it to the side when I took position. And I had to remove distracting things from the wall. This was getting complicated. The diner had by now been entirely transformed! But in the end I managed. And it was appreciated! Mission accomplished... 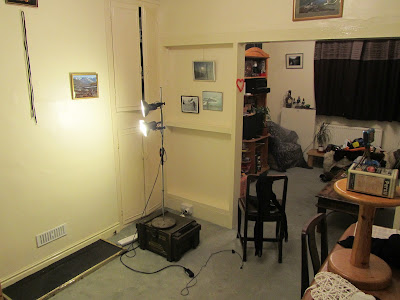 My improvised studio; notice the camera on the tripod on the Persil box on the stool on the table!
Posted by Margot at 09:01