As if I didn't have enough to do yet. A beer festival! My friends mentioned it was on. It was not well-timed. But a beer festival! So I more or less prepared for the days to come, and from university went to town for a quick meal with Tom and a mate of his. That saved me going via my house, which is on the opposite side of town! And after the meal we went to the marquee on the racecourse where all of it would take place, and where we would meet the others.

We walked in, bought our tickets, got our glass (well, made of plastic), already bumped into Louise and her friend Mia before even getting in, and then we stepped into the marquee proper. 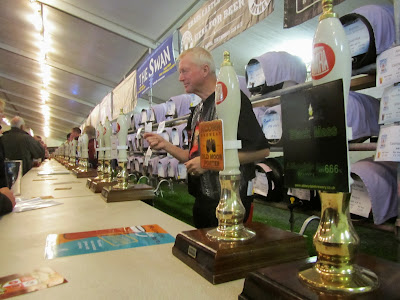 All these beers! A whole marquee lined with a rack in which the barrels were stacked three high. So much to choose from! I stumbled into the nearest counter, and saw a barrel with the label "Absolution". I thought I could do with some of that!

After the absolution I became a bit more thorough in my choices. I had bought a booklet that listed all the beers available. So you could browse it, and look for strange things! I decided to try a smoked beer. I had never heard of such a thing. It was nice! And then a rowan berry beer! Nice too. In the meantime we also teamed up with Abi and her boyfriend Adam. We were complete! 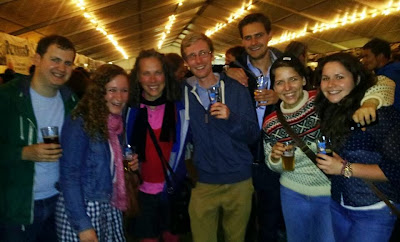 We just randomly occupied a quite bit of the marquee, and from time to time some of us ran off in search of a new beer. Acquisitions were shared around. I tried six different beers (which still didn't amount to much; you could get beer by the 1/3 pint, which is only marginally less than a "fluitje", but still not very much) and I liked them all! I tried to cover many of the types on offer: pale, amber, dark, fruit, spice, wheat and honey. Didn't manage all but came a fair way. And I was still in bed at a reasonable time. It was great! All those beers, and nice friends to enjoy them with! If I'm still in York when the 2014 beer festival breaks loose I'll sure try to come again...