Digging normally is a very egalitarian activity; after half an hour underground everybody looks the same. Jut oblong blobs of mud. But one week was an exception. The digging crew has several active and abandoned projects, all near the same stream. (And some elsewhere, but that's not relevant to this story). It vanishes underground at some point, hence all the caves there, but depending on the weather it vanishes at different sites. And we keep a very close eye on the hydrology; understanding it helps with predicting in what direction (partially) discovered caves go on, and where as yet undiscovered ones may be. And not only that; it is vital to know under what meteorological circumstances one should avoid these caves, in order to not get trapped by rising water and drown.

Water, in these projects, is both friend and foe; it creates the caves to start with, and can flush out sediment. But on the other hand; it can also fill up a painstakingly widened passage with thick layers of mud again. And it can kill you. So sometimes one wants the stream to flow somewhere, and sometimes one doesn't. And the men don't shy away from some Dutch-like tampering with the water;  at some point they had blocked up one of the sinks the stream uses to get underground, hoping to force it further downstream over the surface, and make it flush through one of the projects. But that had been a dead end. And now we were keener to get that sink active again. The precise hydrological reasoning has escaped me, but there was one. So on one Tuesday evening we were going to largely stay at the surface!

We got to the sink in question, dug out the stones and mud on top of the tarp that made this cover waterproof, cut it away, and then filled the hole again with boulders. Water would have no problem percolating down! But it was closed enough for the cows to walk over and not hurt themselves. That was a nicely clean and responsible evening! And as it was still early, we visited one of the abandoned projects, as the newbies among us hadn't seen it yet. And then it was pub time. This time I didn't even change into my normal post-caving gear, which can be characterized by the keywords old and quick-dry, but back into my office outfit... The week after we'd more than compensate for such cleanliness! 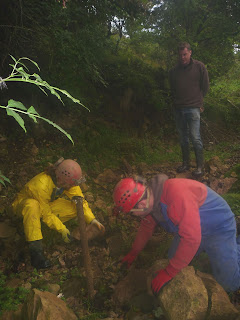 Starting clearing away the rocks 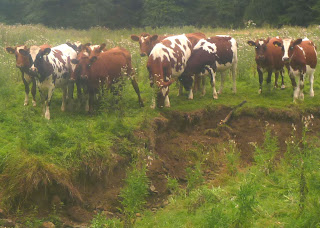 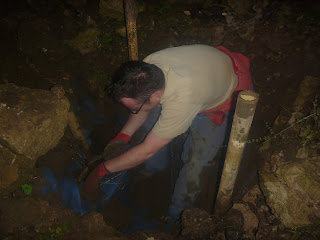 We reached the tarp! 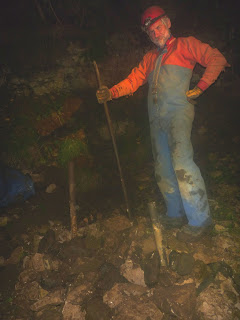 Glorious pose when the hole is filled in again, this time in a permeable way, and the work is done
Posted by Margot at 13:29