What do you do when you approach a long, steep hill on a bike? You get off, you manually lift the chain of the second smallest cogwheel, and put it on the smallest. You get back up and tackle the hill. At least, that's how I've been doing it for some 15 years. Admittedly; sometimes I managed to change into small gear without getting off the bike, but I could never count on it. I suppose people would sometimes have wondered why I could be seen riding a few circles at the bottom of a hill before I would ride up - sometimes it just needed persistence to get my gears to respond! But all of that should now lie in the past.

I have tried many times over the years to tune my gears so that they respond properly. I'm not good at it. So I just lived with it. But then my other bike started to refuse to get into small gear. That's bad! It's nice to have at least one bike that can cope with hills reasonably well. So I brought it to some campus-visiting bike mechanics in Plymouth. They said the front derailleur was just too old. So I bought a new one on eBay. And then didn't get around to installing that.

When I realised you have to take off the chain in order to replace the derailleur, and that I don't have the tool to do that anymore, I decided to bring it to the repair shop to have it done. And that very day they fixed it. They replaced the part? No, they just cleaned it. It wasn't too old! And indeed, it changed gear like nothing on Earth! So I decided to bring in my old, black bike, on which I had crossed several mountain chains, but never with properly working gears, and see if they could do that trick again. And it turned out they had to bend the metal in order to get it to reach the small cogwheel, but they, if that's what it takes! It now changes gear without any effort! After all these years I can now do hills in the way it is meant! I love it! Hurray for the bike mechanic! 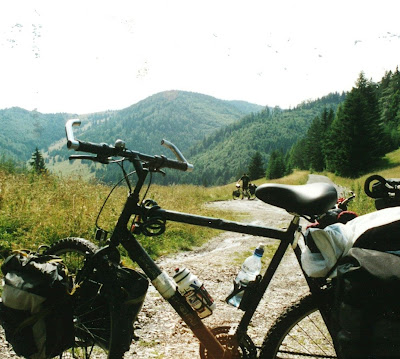 My bike in its younger days, on a Slovakian hill
Posted by Margot at 09:34