Trying to be noisy and smelly

Thirty-seven metres. There is 37 metres between the far end of where we got in Jenga Pot, and the far end of Excalibur Pot. And you can feel a draft at both ends. So they might be connected, be it at the moment not by any passage negotiable by a human. But what might be able to travel through is things airborne: noise and smell, for instance. So in order to check if this observed draft indeed goes from one cavern to the next, we would one evening go to both ends. The Jenga team would support the collapse at the far end with scaffolding, so we could at a later date move through en blow up some more rock without having all of it fall on our head, and the Excalibur team would yell and set off some sort of stink bomb. If the Jenga team would hear or smell that we would have confirmation that the systems link up!

I arrived at the scene, where I found Richard and Handshake. They said they were the Excalibur team; did I care to join? I had only been in Excalibur once, and never been to the far end, so I agreed. I asked if this was a wetsuit job, and Richard said it was. The men vanished, and I changed.

I went down the shaft, and found the men at the top of the pitch. As soon as we were down we went in a different direction than the previous time. It started out innocuous, but that was deceptive; soon we found the entrance of the ominously called "shit creek". Once you're in it, it's not hard to figure out why they call it that! It's not shitty in the sense of filthy all the way, though; but where it's clean you have to crawl over pebbles and bedrock, and that hurts. And the places where the passage is high enough to crawl on your knees is negligible. It's 200m of flat-out on the belly! And quite a lot of that through either mud or water; I was very glad I was wearing a wetsuit... And it was an excellent work-out.

By the time we really thought it couldn't be far anymore it turned out we were right; however, Richard did mention hat the worst was till to come. Oh dear. But it was true: what was left for us was "welly sump"; a U-shaped passage you normally have to bail out before you can get through, but which was dry this time. But it's muddy and featureless, and tight, so you have to squeeze through, uphill in the end, without having purchase on it. But we managed. 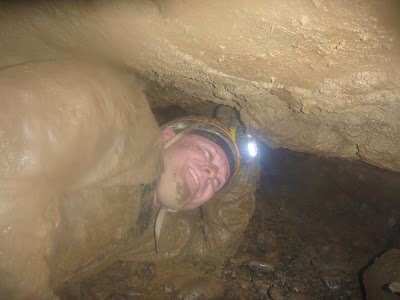 Handshake at the far end

And then there was the final bit of passage; that was quite squeezy, even by Shit Creek standards. But we were there! We were lying in a dry streambed full of rounded pebbles. And it got tighter ahead. This was a s far as anybody had been! I was a bit hesitant to push further; it was very tight as it was already. Richard had even decided to stay on the other side of the squeezes. But Handshake hadn't come this far to turn around. He started to rummage around in the pebbles with a crowbar we'd brought, to see if he could make the passage a bit higher. He managed to stick his head around the corner, but that was about it. He then shouted as loud as a human can be expected to. We didn't think that would help; we couldn't hear any clanging of scaffolding poles, but well, one had better be on the safe side. We took some pictures to show the others, and then we retreated. As a last act we set our incense sticks on fire, and got the hell out of there. 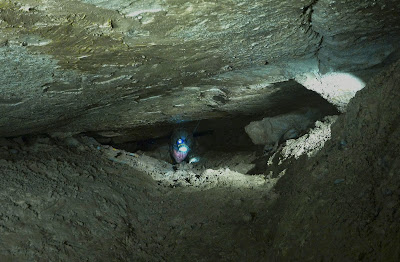 Me crawling back. Notice the trails our backs have drawn over the ceiling. Picture by Richard.

The way back was long. Very long. I was very glad to see the end of Shit Creek! And from there on it was a picnic. In no time I was out, and washing my stuff in a puddle. By the time Richard, who had de-rigged, and Handshake appeared at the cars, I had changed. I decided to go ahead to the pub. There I found the Jenga team; they had started to worry about us! We had been down so long. I was back at the car at 10PM. And they hadn't heard our yelling nor smelled our incense sticks. Unfortunately! But they were excited to hear about how dry it had been. And they had already ordered beer for us, the sweethearts. So next week we'll go back to Jenga and leave Excalibur to itself for now. Jenga is much more promising!
Posted by Margot at 09:16