Everybody who doesn't run can tell you how bad running is for you. Their opinions might be biased, but so may these of runners. I do run but I am sometimes worried about possible damage I am doing to my knees. What was the last time this blog mentioned running on soft surfaces? Quite a while ago. Does that mean I haven't been running since? No. I haven't perhaps done as much running as I should have, but I have been doing regular lunch runs. On asphalt. So how bad is that? Can something be done about it? Who to ask? Peer-reviewed literature, of course!

I stumbled upon an article on barefoot running in Nature. The authors had measured the magnitude of the impact of landing on your foot while running, and with that they had compared runners that normally wear shoes, and those who don't. And it turns out that many of the former rely on the cushioning of their shoes, and just drop on their heel. I am one of those. It also turns out that impact is much lower if you land on your forefoot. The article came with a video, which shows people running in slow-motion, and you can just see the shock the system gets with heel running. 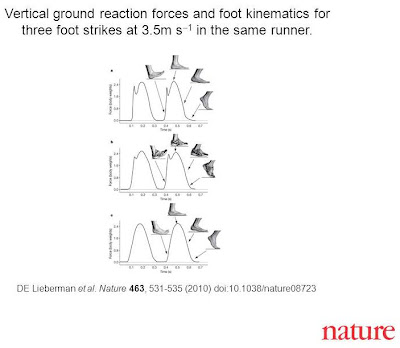 Later I was running myself. When I was going down a slope I suddenly became aware of how hard every impact is. So I thought back on that paper. And decided to give it a try on my forefoot.

It's hard! Your calf has to then absorb the shock. So if you're not used to it it wears you out, and slows you down, but man does that feel nice to your knees! It also made me think of my sister. If I remember correctly she used to run like that. Maybe still does. I hope so! But yet another instance of her being right. Tsk!
I think I will be a stubborn, irresponsible, competitive runner during the Plymouth Half (which is coming up), as otherwise I will wear my untrained calves out and also run a terrible time, but I intend to do my routine running on my forefoot from now on... the second time I already was much less stiff in the calves the day after than after the first time. Maybe by next year I am so used to it I can do the entire half marathon that way, without being slower than I was before! And who knows; maybe I won't need knee replacement surgery anytime soon!