Snow White and the Seven Dwarves

There seems to be a film out about Snow White! But that's not what I mean. I was walking through some woodland with some of my caving mates; we were on our way to a dig, so many had spades or mattocks over their shoulders. We were in good spirits, and striding along the path with bouncing steps. The landowner saw all this, and remarked "it's Snow White and the Seven Dwarves!" So I looked around, and counted; indeed, I had seven male companions... and I can hardly be accused of being tan. I liked the simile!

So what were we, fairy-tale characters, up to? We knew of a mine which was accessible through a vertical shaft, but recently Lionel had found a silted-up side entrance. We wanted to see if we could dig that out. It would give us, and the landowner (who was quite interested in his own mine, albeit interest mixed with a slight anxiety) an easy, walk-in entrance to the quite pretty mine. So we started digging! We had two wheelbarrows, more spades than you can shake a stick at, two poles and a mattock.

There are many things you have to be aware of when engaging in such activities: the sediments might be loose and water-logged, and slump onto you; you may find a lot of water on the other side of the sediments, which will burst out if you're not careful; and you may release lots of sediment into the nearest waterway. All of that is better avoided. And, of course, there is the general issues of several people digging around in mud: the stuff flies everywhere, all get filthy, and every surface gets slippery. In other words: a great night out! We already had two of these; we'll need many more, in all probability. Well, history has shown Snow White and the Seven Dwarves have longevity... 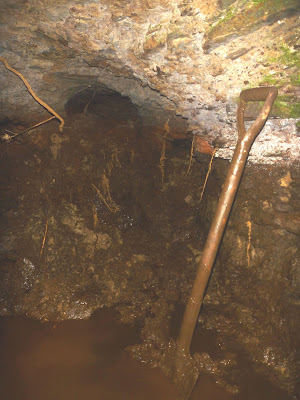 The adit we tried to dig out 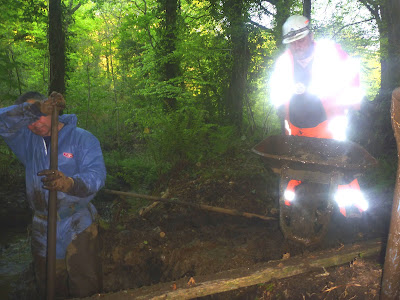 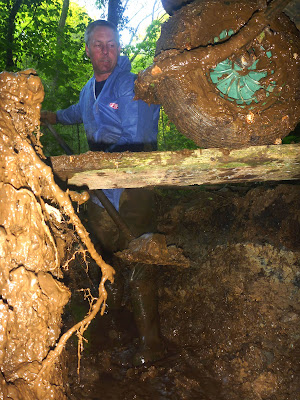