"Do you perhaps take after me?" "Not enough yet!" I was on the phone with my mother when that exchange too place.

When it comes to stuff I actually do take after my father. If something might come in handy, ever, I struggle to throw it away. As a result I have become quite good at fitting lots of items in a small space. And that worked reasonably well as long as I lived in one place. But as soon as you move house the full disadvantages become clear.

I have not even moved house that often, but often enough to be quite displeased with my hoarding habits. I tried to better my life. I tried for years. I didn't really have a steep learning curve in the beginning, but now, after all that time, I'm getting the hang of it. Better late than never!

For the last months I've been actively throwing and giving things away, sending things off, and bringing stuff to charity shops. And I've been digitising photo albums. All of this prompted my mother to inquire after possible family resemblances. And altogether it has started to show now! I still have a way to go, but with my new chucking skills I should find it relatively easy to reach an appropriate level of material possession. And I think as well I will be able to keep future gathering under control. Next time I move house will be a piece of cake! And I apologise to those who helped me move from Amsterdam to Tromsø; I know that if I would just have gotten to this point 5 years earlier it would have been much easier for you lot! 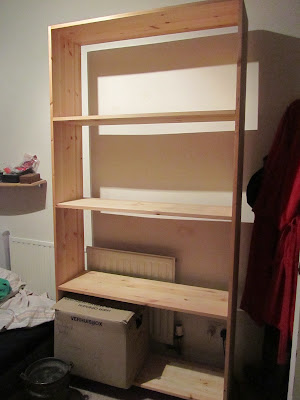 I'm so prolific I can almost get rid of an entire cupboard!
Posted by Margot at 08:09

The former content of that cupboard has made it safely to my doorstep, and it isn't even paid yet! ...and now for the great unpacking... ^_^

Oh! It has arrived! I'm glad. Have fun with all that stuff!