I leave a trail of blood all over town. I mentioned it before: the bloodbank in the UK is not located in a building; it's a roadshow. And I follow that show around. Partially because if you wait until they are at a location near you you don't donate at a very high frequency, and partially because I think it's a charming way of exploring the city. 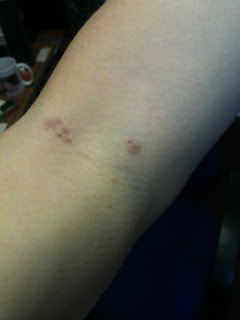 Not the cleanest donation

Last year I ended up somewhere in the northern parts of town; north of the dual carriageway that cuts through Plymouth. And there aren't many places where one can cross that road. So I took the roundabout that I also often taken by car. That means a lot of biking on roads that are not very comfortable for small vulnerable cyclists. I was even wearing a camera on my helmet; I was helping a colleague out with a small research project on cycling in Plymouth. 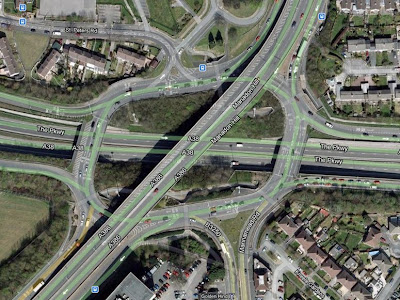 But when I later drove past that same roundabout with some caving friends, one of the more bike-prone ones mentioned there actually is a cycle path there. That sounded interesting! And while driving past on later occasions I indeed saw it; it is pendant below the road. But how does one get there?

I went to Edinburgh. And Ireland. And Norfolk. And I was a bit under the weather some of the time in between. Not much opportunity for donating blood. But now I'm back; I'm in town and I am in good health. Time to have other people share in that. And the next opportunity for donating was that same northern venue. So I had a good look at Google Maps; I managed to find the somewhat inconspicuous route to the path under the roundabout. And it continues; it snakes along the main road for a while. I needn't have biked so far along that dangerous road! I feel a bit guilty now; I didn't give Plymouth the credit it was due. But now I know, and if I ever go back in that direction I now know what route to take! Better late than never... 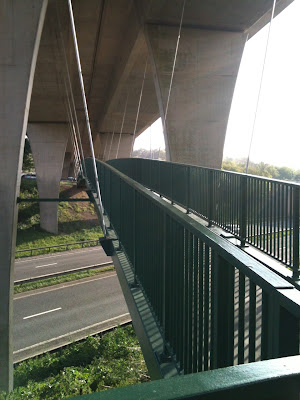 The pendant bicycle path
Posted by Margot at 17:18