I announced succes. Here, one the blog. Almost a year ago. I had managed to make my camera waterproof again. It was supposed to be, but heavy abuse had damaged the casing, which allowed water to come in freely. And I had clamped the casing back with brass brackets! The idea was nice, but the materials used had been too fragile. The abuse of the camera continued, and that lead to the little bolts used snapping, and the brackets coming off. So I needed to have another attempt, with larger bolts, and thus also bigger nuts and brackets. And I finally have!

It was an enourmous amount of faff; the brackets have to be PRECISELY the right size, but bending them into shape with pliers while they are red-hot is not something you easily do with sub-millimetre precision. So one tries, cools the bracket in water, tries it on, realises it's just not right, tries again, ad infinitum. And if one gets impatient that leads to broken brackets. But I have managed in the end. I hope this time the bolts will hold! Even if I drop the camera on asphalt; something I'm fairly likely to do. Stay tuned! 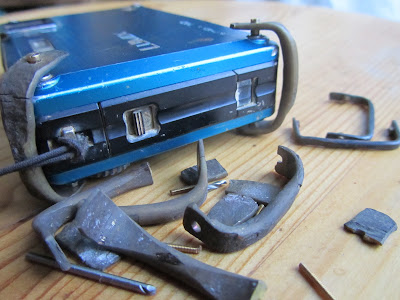 The finished product in the background, with the old brackets to the right, and the damage done in the foreground. I broke four brackets and a drill...