Voting; it comes in waves

On Thursday I voted. And less than 24 hours later, I received an invitation to register for the next elections. Thursday was the day of the English local elections; I can now register for the general elections in the Netherlands. I downloaded the form, and now I only have to add a copy of my passport and send it off, and everything will sort itself out from there.

That I got to vote in England again (I've been to church to cast my vote before, here in my street) means I've already been here a while; these were just the regular elections that take place every second year. I'm starting to grow roots here...

The Dutch elections are another matter; these take place all the time. It's been a while since Dutch governments had the habit of staying upright for a while. This one lasted much longer than I had anticipated; I wrote on this blog, in October 2010, that I gave them six months. They managed a whole year more! I hope that the next coalition inspires a bit more faith. And only has participants and non-participants; no parties half-participating as was the case until things fell apart a few weeks ago. Sometimes black and white form a nice colour palet. Even though I don't mean that in the way Geert Wilders does... 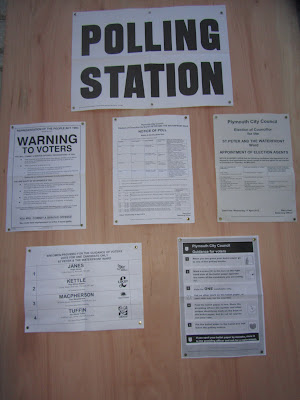 They leave little to chance at my polling station! 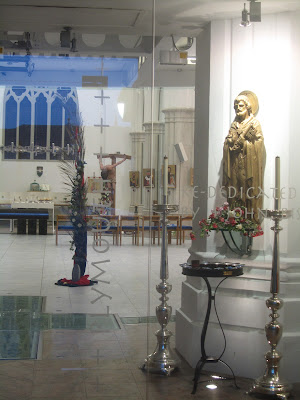 I challenge anyone to find a polling station with a more dejected crucifix! Though I must admit this is the nave of the church, while the polling station is in a side aisle. But still...
Posted by Margot at 19:30