A new phase in my academic career has started. One that I still enjoy while I write these first lines of a blog post; by the time this posting is finished and published the joy has most likely faded into dread. I am talking about marking.

When staff and students return from Ireland the work is far from over. The students have to write all sorts of reports; they have to write a group report on the student-lead project they have done, and most have to do an individual report on one of the staff-lead projects they have done. Some have to also write a "reflective account" on the whole concept of fieldwork. Why is it not the same for all students? Thy are enrolled in different programs. Some do pure geography; some do physical geography and geology combined. And there's even a finer subdivision than that. But anyway; there are many reports to be marked, and these are equally distributed among the fieldwork staff. That means there is an incentive for the staff to come up with interesting projects: the more students that write reports on "your" projects, the fewer reflective accounts you have to mark. And the reflective account is, I guess, less popular with both students and staff: the assignment is much vaguer. It's much more inspiring to write about actual data you have collected in the field. 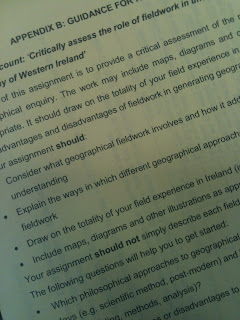 Extract from the course handbook on the "reflective account"

So a little over four weeks after the fieldwork I received the reports I have to mark. I had one report from each of my student-lead project groups, only one report on my staff-lead days (I must be one of the more boring members of staff) and then ten reflective accounts. And I figure the latter are the least inspiring, so I started with these. I think I can see it's not a favourite exercise; I heven't yet seen highly inspired reports. I can't blame them; it's a bit of a vague assignment. And I was a bit too pessimistic: I am reaching the end of thhis posting, and so far I have still been enjoying it.

Sometimes it's the joy of finding a passage that is especially well-written or well-constructed; sometimes it's te more cynical snigger of finding something downright outrageous. Such as? One of the students had meticulously documented his sources. As the text made me wonder if a reference was appropriate, and whether the source was accurately cited, I looked it up. And after the first reference I looked the rest up as well. Anticipation was high: what outrage would I find next? A lifestyle website quoted as a scientific source, a philosophic concept with a reference which turned out to be a dodgy online dictionary that didn't contain the word in question, and even the website of a church quoted as a scientific source.

Dear students: please give us only that first category of marking enjoyment. I admit, and how couldn't I? that the second makes for better anecdotes, but in the long run it's better for everyone if such things are avoided. And don't think we won't notice...
Posted by Margot at 08:04