the Netherlands - a year later

My mother thought it was a splendid idea. Some weeks ago I wrote about my somewhat late realisation that science is a beautiful thing, but that one should not dedicate so much time to it it leaves none for family visits. And now I've started to festoon these words with concomitant actions! On a cloudy Friday afternoon I finally met her again; the previous time had been a year ago. Shameful! But better late than never.
When I was in the country anyway I visited my sister too. And all of her family. That tends to involve a lot of activities I don't otherwise engage in, such as game of the goose, or hide and seek. Of course I was wearing a bright red jacket while my competitors were wearing black or green.

The rest of the weekend was spent on tourism; on Saturday night, Hugh joined me. Is it a surprise he had a hand in making me do the right thing? Judge for yourself. He came straight from a big conference in Vienna (for the earth scientists: yes indeed, EGU), and had figured that of he was on the continent anyway, he might as well stop over in Amsterdam. He'd never been there, and now he had a chance to get himself a local guide. So for the first time in my life I would spend a night in an Amsterdam hotel! That was not an unequivocal pleasure: we were soon to find out why this hotel was vaguely affordable, in spite of being just north of the Stadhouderskade. But it was a roof over our heads.

Hugh's wishlist featured National and van Gogh museums in the top 2. That could be arranged. We also managed the Amsterdam Historic Museum, and Queen's day, and two of my favourite pubs (de Zotte and de Sluyswacht), and posh dinner in de Waag, and a few beers and amazing food with a select number of friends. Not a bad score! Next year we all have known each other for 20 years... that's worth another celebration! We've all become much older, wiser and prettier in the meantime. Let's see how long we can keep that going!

One thing I found hard was the walking; I figured that renting bicycles might lead to undesirable effects. I am quite used to biking in Amsterdam. Under most circumstances. Hugh isn't; if we would try to bike through the heart of the city I might very well lose him in traffic. Or I would perhaps not, but get impatient trying to not behave like a, well, impatient capital dweller. And foreigners tend to bike in convoy; that does not allow for conversation, and therefore is not too suitable for a social trip. So I decided it was best if I adapt and walk everywhere. And that worked rather well; it was worth the sore feet.

My next port of call should be Helsinki, but I will make sure this time less than a year passes before I return to my country of birth! There are too many people I want to see there. And nothing wrong with an occasional museum either... 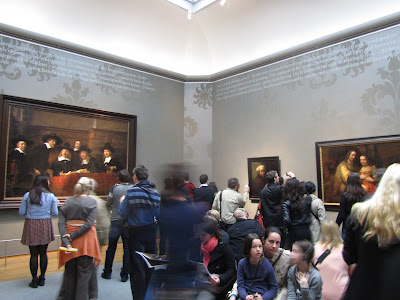 The National Museum allows photography; here one can see three very famous works of art in one picture... 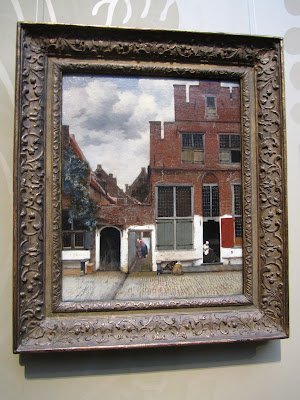 I like this one: 'The little Street' by Vermeer 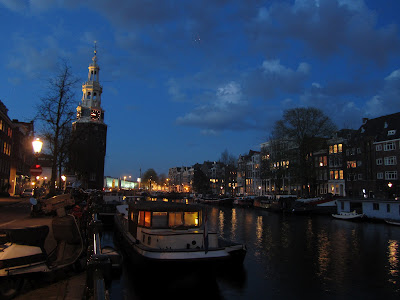 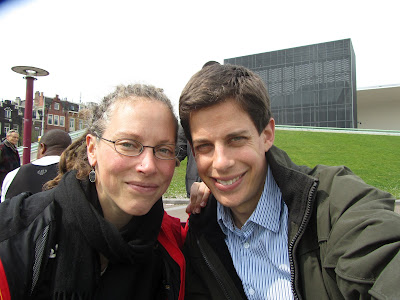 Hugh and me on Museum Square. The van Gogh museum does not allow for photography, so one has to make do with this picture taken near it. 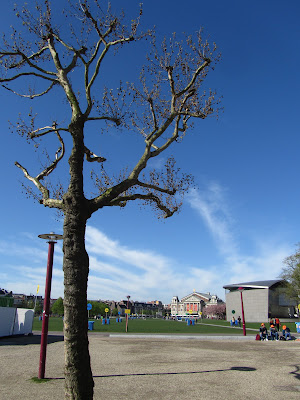 Queen's day on Museum Square; I've never seen it so sedate! But the blue skies are familiar; I think the weather gods are royalists. 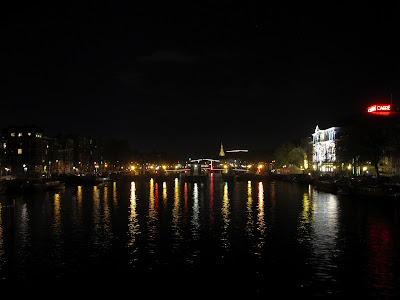 The Amstel by night as a last picture