Requiem for a species

The patient’s library has more to offer! After books full of history, politics, trivia, and even fiction it’s time for a review of yet another climate related book. I must confess I didn’t read this in my sick bed, but when I did read it I didn’t have time to write a review. And now I have, although it has become a bit of a blend between a book review and me just having a private rant. So what book is it this time? It’s the view on the climate issue from a professor in public ethics. Not a climate scientist, but clearly a man who has informed himself well. It’s littered with relevant references. And what does he have to say? Roughly this: anthropogenic climate change is a massive problem, and there are endless lists of reasons why it’s not been dealt with properly at present, but we should change that. Have we heard that before? Yes! But is this book worthwhile? Yes! So as I don’t think there are many sour climate sceptics visiting this blog I suggest, reader, you read on, if only to remind yourself of some of the matters at hand.

Requiem for a Species, by Clive Hamilton.
He starts by saying that anthropogenic climate change is as close to fact as science gets. For me, that is evident. And yes, I am a climate scientist, so yes, I may be in some global conspiracy that aims at world domination by spreading climate lies. Whatever. The science is clear, whatever non-scientists may think. The problem is, non-scientists are allowed to base themselves on cherry-picked information, or none at all, and we aren’t. And we say what people don’t want to hear. And we can prove it, but nobody will ever have a look at our proof. Is any member of the public willing to plough through piles and piles of scientific articles, which hold the data? Of course not. And one could say: we made all these data up. Hmm. Sometimes a scientist is caught making things up. And there goes their career! Anyway; I digress.
The science is clear, but politics don’t respond. Once in a while targets for cutting CO2 exhaust are formulated, but has any nation ever reached such a target? And even if they were reached: they are based on what is politically feasible, and that has NOTHING at ALL to do with what’s scientifically justified. And exhaust of greenhouse gases goes faster and faster and faster. And it is not necessary; if you want to know what could be done read either George Monbiot’s "Heat", or Chris Goodall’s "How to live a low-carbon life". But both books suggest rather thorough change. And as the neighbour isn’t making that change, we are not likely to do it either. This also work on the larger scale; many are the politicians who point at China, and say it’s no use trying to do something about climate change as long as they don’t either. But since when is “somebody else is worse” an excuse for detrimental behaviour.

And it’s scary; hardly anyone has any grasp on what CO2 does. It’s just a number; isn’t it, reader? How many of you have an idea of pre-industrial levels, of the natural variability, and such things? Even with a well-educated audience I suppose not many have a solid grip on these things. And when it comes to the changes already taking place: if you’re a farmer, you might notice changing life cycles (plants in bloom earlier and earlier in the year, strange species invading), but most people aren’t farmers, and spend most of their time staring at screens.

It has been estimated that September 25th, 2009 was what is called “World Overshoot Day”; the day at which what the Earth produces is equalled by what humans consume. So every day since then, we consume more than can be replenished. And in spite of that, every government around the globe want “growth”. That’s a collision course if there ever was one. Can we do without? This book tries to answer that question. And could, perhaps, technology save us from the link between growth and destruction? In this light it makes sense to behold the “IPAT equation”: I=P*A*T (environmental Impact depends on Population, Affluence and Technology). Trying to curb population won’t do much good; it’s the rich that exhaust most, and they already have few kids. Affluence: nobody wants to spread poverty. So technology here is the only one that might give hope; however, Tim Jackson has calculated how much technology has to provide to keep the “I” within limits. It does not inspire much optimism.

And back to growth: Stern already famously calculated for us that said mitigation is cheaper than adaptation, but nobody looks at the longer term, especially now, in times of economic hardship. Cynically enough, growth may be a good thing in societies where people still die of hunger or easily preventable diseases, but in western society it doesn’t, as above a certain threshold (and in western Europe, we are generally above it) money doesn’t make one happier, as long as it is everybody who doesn’t gets richer. It matters more how much you earn with respect to the neighbour, than what the absolute amount is. Growth, as well, is a silly thing in a society where you can make money by selling self-help books on de-cluttering your house.

This is turning into a bleak story. (How surprising). So we do know what should be done, we know how to, but these days there is no political will; many a “green” energy plan (link gives example) has recently been scrapped since the European economies started faltering. And consumers are more likely to buy into green wash than into initiatives that really make a difference. Some may say we could invest in geo-engineering, but beside the fact that I'm sceptical about it, there is even less money for that sort of jokes nowadays. 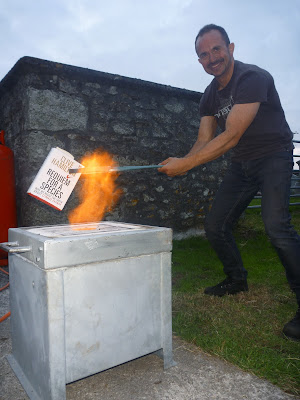 Not everybody is enthusiastic about this book
So what will happen now? A thorough evaluation of that question needs much more reading than I can currently afford, but count on changing precipitation patterns, rising sea level, melting ice (also where it’s necessary as drinking water supply), and of course simple higher temperatures. The latter will be felt worst on land, due to its lower heat capacity; and land, that’s where we live. Canada and Siberia will probably benefit, due to more land coming within the climatically arable zone, but that’s little solace for, say, African famers, whose land will migrate out of that zone. And in general, the Southern Hemisphere is screwed, as it will lose arable land, but won’t win any, as at the crucial latitudes there’s only sea there.

So what must we do? Clive Hamilton says: shake off all indifference, ignorance and fatalism, and act anyway! And that is probably the only reasonable thing to do. Though I admit that every time I write such a review, my heart is heavy. So don’t listen to me: listen to Hamilton! And Monbiot! And Goodall!
Posted by Margot at 12:29