When you take 106 students on a field trip to Ireland, taking them on two excursions, having them do one staff-lead project and two student-lead projects, you had better know what you're talking about. There’s a lot of opportunity there to either shine or sink. I had never been on the Irish west coast. I had decided to do some projects that had run in previous years, so I would not have to come up with projects without ever having seen the place. But in order to really supervise them I would have to see the geographical features for myself.


Of the 13 members of staff that will lead this trip this year, four had never done it before, and one had only done half the trip. So all of us (partial) newbies teamed up to go and have a look at our field sites, and Wil, who happened to be the general organiser of the fieldtrip, came along. That way on a dark Friday morning five scholars gathered at a still empty university, loaded their bags and themselves into a big car and set off to Totnes. There we picked up scholar number six, and off we were, to the airport.
We would arrive in Ireland in the afternoon, and have just a bit of daylight left to do some exploration on the first day. We would then have an entire Saturday, and then Sunday morning, after which we would have to get back.

Without incidents we arrived in Shannon, where we rented three cars. And then we were off, without any wavering, into the field! Our comic due Pete and Chris shot off, as they mainly had their business in the south. Pete, our fluvial geomorphologist, was looking for suitable rivers, while Chris, our urban planner, had all sorts of plans as to what the students might want to be researching in the various towns. Alison, our glaciologist, had her eye on glacial features further north, while my areas of interest were all the way at or near the north coast. Of Galway Bay, that is; not of all of Ireland. And Louise mainly had business in Galway itself (even further north!), but that would have to wait to the Saturday, and now she was quite happy to come with me. Wil had decided he would come with Alison, so neatly distributed in the cars we ventured north. My first glance of western Ireland! It’s very beautiful. Green rolling hills, the stark bleak rock landscapes of the Burren, and crumbling ruins from the Stone Age to the previous century on every street corner. Amazing! 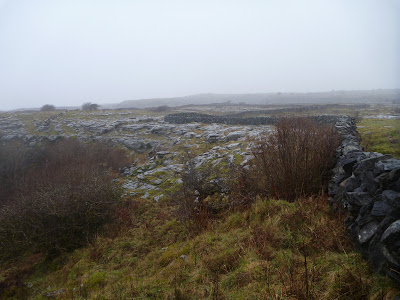 My first glimpse of western Ireland
When we reached the little lake I wanted to core Alison caught a glimpse of what from a distance looked like interesting glacial sediments. I had prepared well; I knew where the gate was, where exactly I would have to core, where the owner lived and what his name was, so I was quite happy to get down and dirty on my own. Wil wanted to come with Alison, and Lou preferred sediments exposed in a section over standing over her knees in water, so they all shot off. 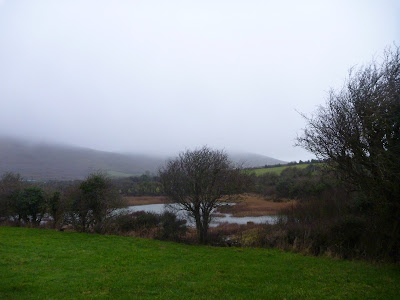 "My" little lake!
I took a core. I knew what to expect, but it’s always good to have a look for yourself. Mud is better than hearsay! When I was done coring is was practically dark. I dismantled the corer, cleaned it, changed back into civilian gear, and by then in the pitch dark I went to meet the owner. A most friendly chap! So far this trip was going swimmingly! 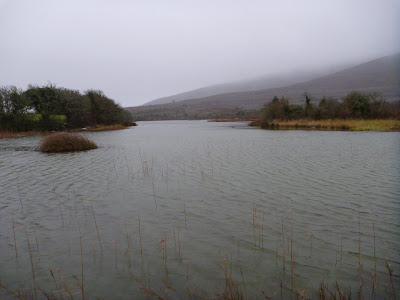 The lake seen from inside it 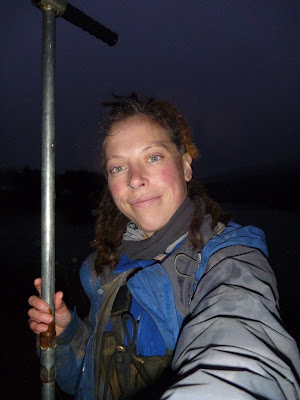 Done coring; just in time as light is fading!
When I was done the other car showed up again, and I stole Lou back so I would have good company for the drive home. This became a bit more eventful than it should have been; I had the address of the hotel, and all coordinates of my field sites in my satnav, but we soon had to conclude the charger was broken. So out of the window with modern navigation! We had to drive back on a map with a rather sub-ideal scale, and also a sub-ideal date of manufacture. Since that map was printed these Irish had built quite many new roads… luckily we recognised the number of the road the hotel was on (preparations, again!) and only with a mild detour we got to the hotel. Champion navigators, we! By now with empty stomachs… it was getting late, and we had had a light lunch at Bristol Airport at 11.30!

When Lou and I came in we found Pete and Chris, already working on their second beer. When we checked in we saw Alison and Wil come in too. Time to get out of our field boots, and into the pub for some well-deserved grub! And a pint of Irish stout. Or perhaps two or three. So far things were working out quite well! And this was only the first day! Stay tuned for days two and three, where it gets even better...
Posted by Margot at 20:16