In March I will have to take 106 second year students on a walk, telling them about the geomorphology and vegetation of limestone areas, the effects of changing lithology on drainage, soils and vegetation, rural settlement patterns and land-use in the past and present. The day after I have to show them aspects of rural economy, show how a previously glaciated landscape and the underlying geology control forestry, drainage and agriculture, lecture on river basin and coastal planning, and the uneasy balance between tourism and preservation. Then I have to guide them in doing a small sea level reconstruction project. And that already sounds enough for one week, but no; I also have to inspire them to measure big boulders on a beach, and ponder their provenance, and supervise them when they assess whether a specific spit merits governmental protection. It’s quite a lot! Especially if you ponder how much of that I have actually been educated on myself.
The coming weekend we will go and have a look. I’ll get to see my sea level field site, my boulders and my spit. And in order to get as much out of that trip I had better come prepared.

The boulder project needs the most attention. A previous year, students have measured the position, orientation and size of 60 boulders, and marked them. I will now go and have a look; with the university GPS I should be able to find them back. Even if the marks have come off. If they are indeed identifiable the students can have a look at whether they have moved in the past year, and how that matches with data on things such as wave height. And if something hampers that they may for instance replicate the initial survey, and make sure this time it’s done better. 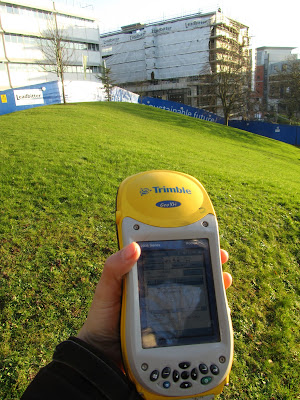 Surveying random objects on campus
In order to do my investigation I have to know how this specific GPS works; this week I have found back some curbs I had surveyed earlier, with Richard the technician, who had taught me the ropes. So that’s done! I then proceeded to have a look on Google Maps to get an idea of the actual boulders. That was less of a success… I hope the weather will be better when we get there than it was when Google had that aerial photograph taken! 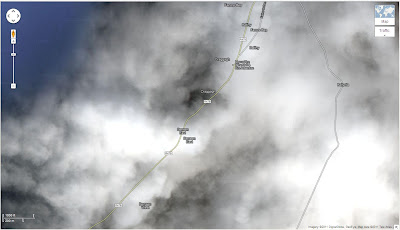 The very illustrative Google Maps image of the field area
Posted by Margot at 08:06