Finally! After almost three weeks of being all dainty and intellectual I did something silly and muddy again. It seemed to take half an hour for the water to not be black anymore after having percolated through my hair when I had a shower afterwards! And I was bruised and slightly stiff in the muscles. A good day. 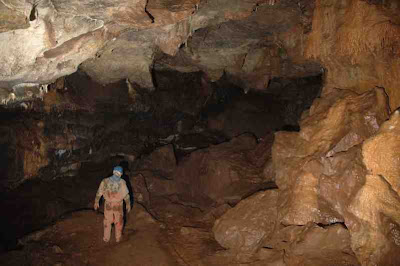 Baker's entrance chamber. Pic by John
“We’re here to see that caving can be still done at 60!” And we knew that. One of those present at the underground birthday party was 64 himself. And we have the tireless Hugh and Trish. And the cave rescue team has the unsurpassable Mike, who’s in his seventies. But still, one of our more active cavers, Bernard, turning 60 was a splendid reason for a party. Not just any party; a party mainly consisting of a veritable caving spree down Baker’s pit. 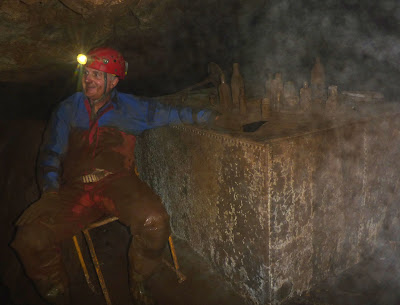 Birthday boy Bernard in the archaeological part of Baker's 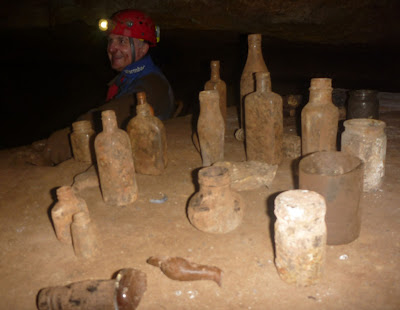 We went in with a rather large group. It didn’t take long for several sub-groups to form; some more keen on trying climbs and squeezes, those in it for a relaxing ramble, those focussing on taking pictures... Baker’s caters for all!

I am starting to get rather familiar with Baker’s, but in a way that makes it even better. I liked going up the upper series again; I’d only been there once before, and it stays challenging. And in the latter part of the trip I saw places I hadn’t been before. And some of that had rather nice formations. 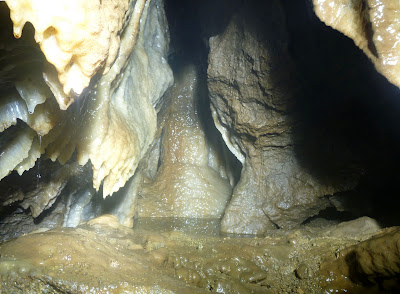 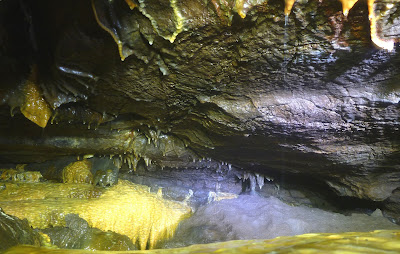 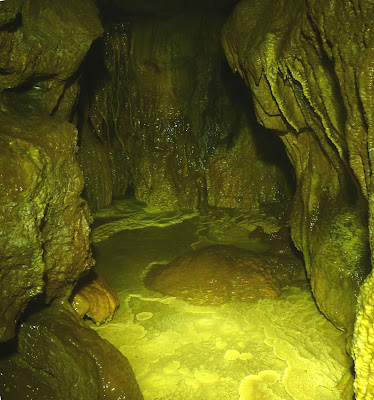 By the time we came out hours had passed. We were starving! But luckily, we were at a birthday party, and there was food galore. And drinks! It was quite funny to see our table, entirely populated by those having been underground, being swiped clean of any food, while folks at a neighbouring table couldn’t even half finish theirs. They had stayed at the surface... 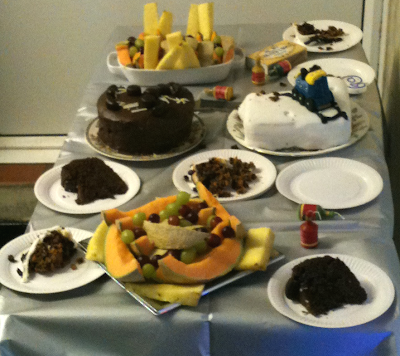 About half of the birthday desserts! Notice the little train on the white cake...
After dinner it was time for Bernard to blow out the candles on the train-festooned cake. And give his small speech. And for any lingering appetite to be taken care of by the four cakes. And then some of the workaholics started to look at their watches. Time to go home; the next day would be another working day! But then we were called to another room by Bernard’s daughters. They had something else for us in mind: birthday games... I hadn’t participated in the kind since primary school, and that was for a reason. We all participated in the first one, but after that the first people started to make their moves. In spite of the games? Hastened by them? Who knows. Either way; I hope the die-hards partied until deep in the night. And we all look forward to Bernard’s 70th birthday; the suggested venue is Afton!
Posted by Margot at 19:33