It's easy to hurl greenhouse gases into the atmosphere. It’s not so easy to get them out of there. The whole world is still burning fossil fuels like mad, and only a small minority is willing to reconsider that. Even if the shit hits the fan people might not want to give up burning whatever they can burn. Every man for himself! So it’s not strange that there are people who think our best bet is trying to adapt to the climatic upheaval that is imminent. And there are two angles from which that can be done. One is: trying to mould our environment to meet our needs, such as building dikes, redistributing water, moving populations and whatnot. The other one is: tampering with the climate signal even more, but then with opposite effects to what we have so far. And that falls within the field of geoengineering.

There are ways of anthropogenically inducing cooling. Many ways. Some of them have been studied and discussed so much they already have widely accepted acronyms. One of these is: Solar Radiation Management (SRM), and it has many different faces. One is very simple: just paint every dark surface white. That will reflect lots of sunlight back into space. There are also ways of making marine clouds more reflective. You can also mimic volcanic eruptions: toss black carbon and sulphur into the stratosphere. After every big eruption, such as that of the Pinatubo in 1991, global average temperature drops for a while. Or you can drop all sorts of reflective thingies in space, between the sun and the earth, so sunlight is even reflected before it reaches the top of the atmosphere. So many options! And climate change is a dangerous thing! Should we try it? 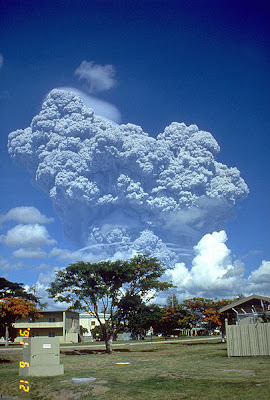 The 1991 Pinatubo eruption; picture courtesy of the U.S. Geological Survey

It sounds all very nice, but there is always a catch, isn’t there? If you, for instance, paint all sorts of surfaces white, you would cool the continents by making them more reflective, but that would also influence the temperature gradient between land and sea. And that gradient is what largely dictates precipitation patterns. We wouldn’t want to create massive drought in China in our attempt to stop climate change, would we? And of course you can try to cool the oceans by making marine clouds more reflective, to even it out, but that requires a level of fine-tuning we haven’t reached. Why, by the way, only make only marine clouds more reflective? I have to admit I don’t know. But I’ll give a reading list at the end of this post and those who bother to read that will know before me. It’s an offer of weakness, but there’s only so much time I have.

If you put mirrors into space you may influence climate in an uneven way as well. The Polar regions are less directly influenced by the sun than the Equatorial regions, for instance. It’s a darn expensive thing to do, as well, but climate change is already costing us unspeakable amounts of money anyway, and in that light it’s quite cheap. And space mirrors may be fairly manageable items: if you don’t like their effects, you can just remove them again. Again, very expensive, but possible.

Putting all sorts of aerosols in the stratosphere is a “solution” that greatly scares me. Sulphates and carbon in the stratosphere also have all sorts of effect other than homogeneous warming. It’s not entirely clear what they would be, but just finding out by trial and error may cost many, many lives. And you might accidentally throw other things in the atmosphere as well. Or it may go somewhere unwanted. And I’m not saying you should never do anything of which you’re not sure what the effect are, but we do know such things, just like painting the continents white, will influence precipitation patterns. And that’s bound to do damage.

Another point with this approach is that these aerosols will be naturally removed, so you have to replenish them all the time to keep the cooling up. If it would happen something goes wrong and you stop replenishing after a considerable time span, the temperature will shoot back up to what it would have been without these sulphates, which is climate change at mind-numbing speed. Scary! And what if people will use it as a means of exerting power? If it’s people who keep the flow going, they also might, for instance, decide to stop doing so, if climate models indicate it would be other people than themselves who will suffer for that. Or only threaten to do so. Too much power in to few hands!
So what do I think of SRM overall? What can I say. I think we should focus on trying to not damage the system too much, rather than to fight the symptoms. Every time humans tamper with the system things go wrong. Humans thought it was a good idea to introduce rabbits to Australia. If we first disrupt the system by changing the atmosphere, and then we go change the incoming radiation too, there’s just too many ways in which that can go wrong. And before you know it every country that paints 5m2 of its surface white claims the moral right to hurl endless amounts of CO2 into the atmosphere. And then we’re worse off than ever. 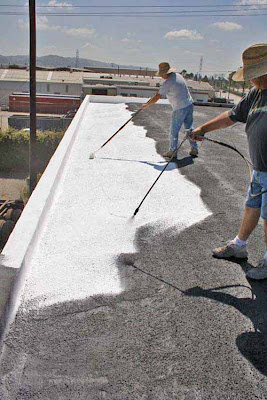 But if we don’t use SRM, would we instead focus on reducing emissions? Not very likely. And in that sense SRM has a strong advantage: it’s sexy! You can have the rich nations do it, they can show off with it, people can earn money with it… much more likely one could convince the US to install a space mirror than to become energy-efficient. So in that sense we might want to do it anyway. Not because it’s the best option, but because it’s the most feasible one. But then I’d say we should try to choose versions of SRM that are easiest to reverse if things go wrong. So perhaps indeed paint the roof white. And install that mirror, even though that would as well place lots of power in few hands.

It’s a bit of a catch-22, this. You could say we don’t have the right to tweak the system like that. But we also don’t have the right to tweak the system the way we are already doing. Maybe there’s an answer anyway; many people have written well-wrought books about the topic. I haven’t read any of them yet. I hope I will, though there’s a bunch of other books in the way on my to do list. But those who are intrigued now: don’t wait for me! Read them yourself! And draw your own conclusions. In the meantime I will blog on about another option: trying to get rid of the CO2 in the atmosphere instead of trying to compensate for it. Stay tuned for more climate talk!

Reading list:
Fixing the Sky by James R. Fleming
How to cool the planet by Jeff Goodell
Hack the planet by Eli Kintisch
Coming climate crisis by Claire Parkinson
Posted by Margot at 16:56