The plan was to have a whole week of holiday. But day after day was consumed by ill health. Even the new year came without my normal shape having been restored. But then, on the second day of the year, I had recovered enough to merit a modest and calm trip. Hugh, in spite of still having plenty of employment for his handkerchief, had proposed a little road trip, and I felt up for it. That way we could have one day of careless leisure before working routine would take over again!

After due consideration we decided to go to Fowey; it had a tiny little fortress; not anywhere as impressive as many in the vicinity, but in contrast to most this one could be visited in winter. It had some other architectural gems, and plenty of coastal path, and undoubtedly some nice pubs, and it wasn’t too far away. And we had never been there before. I couldn’t resist googling if there were any interesting remains of the quite considerable (cluster of) mine(s) with which I associate this town: Fowey Consols, but unfortunately, there seemed to be little left of it. 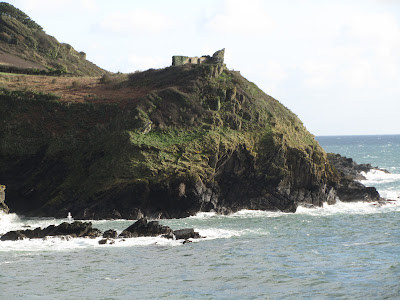 The other side of the estuary mouth seen from Fowey.
Through weather that couldn’t decide on rain or shine we drove thither. And were greeted by a very charming town indeed! Unfortunately, we were also greeted by a phenomenon I greatly dislike: the parking machine that only accepts coins. I had none of value, and Hugh only managed to rake together enough for 2 hours of parking. We would later decide on whether we would get change in town and refill the machine, or limit ourselves to these two hours, and seek solace elsewhere afterwards. We would in the end choose the latter, and regret it. 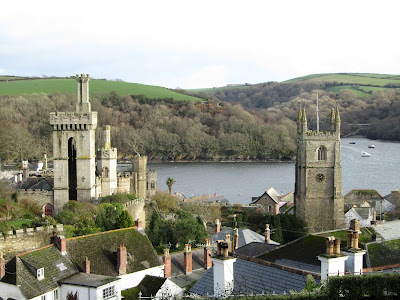 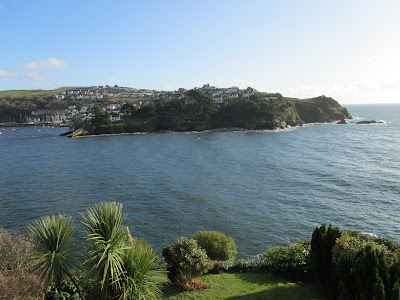 View from Fowey over the estuary
We walked down to the beach from where the little fortress could be reached, and subsequently to the fortress itself. It was most charming! We even tried to scale the walls in the most innocent of ways, but from the inside that was little success, and from the outside it didn’t provide the excellent photo opportunity I had hoped. And while at it we even gave some kids what their parents clearly viewed as the wrong ideas. 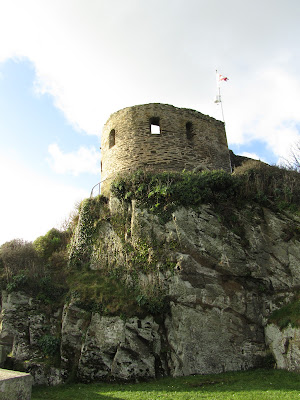 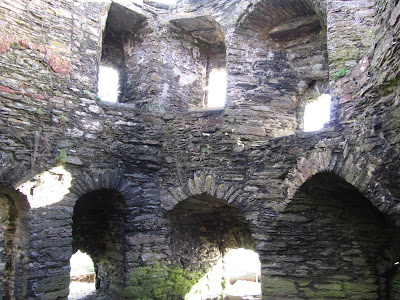 The fortress from the inside

Having seen that we strolled leisurely through town like a proper English lady and gentleman. Time was pressing though; we would have no time for lunch before our parking time would run out. And that was when we regrettably decided to leave, and find a country pub to have lunch in. 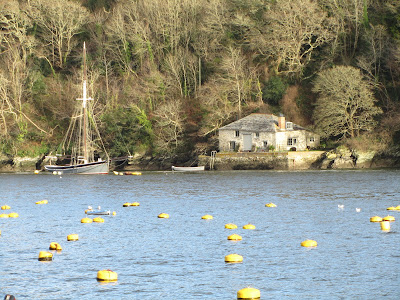 The pub of our choice was reached without problems; parking, though, proved trickier as there was some horse-related event going on which lead to many cars, often with cumbersome trailers. But that was the least of our worries; the kitchen of the pub was closed! And we feared the same may hold for all country pub kitchens nearby. We had been spoiled a bit by the pubs on more frequented Dartmoor...

By the time we got back to the car, only a minute or so later, some horse-pertaining person had already deemed it a good idea to block our exit. And acted as if our request to move his car was the grossest injustice ever hurled at man. The day had clearly taken a wrong turn! We decided to try Launceston; we had to drive through anyway, and larger towns might have more liberal opening hours. But before we could check that we had yet another encounter with a parking machine; this one delightfully did not only accept coins but also credit card payment performed by telephone; a feature I hadn’t come across before, and with which I struggled a bit with due to the use of voice recognition software that couldn’t distinguish between my “P” and “D”, but which did work in the end. I want more of that! No more Dickensian scenes with coins as the only tender.

We went into town to check our faint hope on a pub meal. Launceston presented itself to us at its bleakest and most soulless; our already slim hope shrank to nothing, and quite numbed and hungry we devoured a pizza at a depressing kebab joint. The pizza refuelled us such that we had the energy to ogle the Roman castle the town boasts on from a distance; of course it was closed. In the fading daylight it did provide an impressive sight though. One day we may be back to have a closer look, and then we will make sure we seek lunch before 2PM!

All in all our holiday had boiled down to these 2 hours in mainly sunny Fowey. It’s better than nothing! Tomorrow back to the grinding mill...
Posted by Margot at 15:36