While I was ill I read several books. And that kicked my reading hunger into overdrive, and in the days I was fit enough to work but not fit enough to do things such as run or go caving I just kept reading. And even after I had recovered completely I kept reading.

I had a non-fiction book on my to do list, but still being a bit fragile I decided to not strain myself too much, and keep on the fiction tour for now. I started out with a classic I had never come round to: Franz Kafka’s “the Trial”. And as I was still trying to make space in my cupboards I also read two books I just happened to have for no apparent reason. I wanted to find out if they were worthy of a place in my cupboard. Actually, I tried three; one ended up on the “to be discarded” pile after only two pages. The other ones got approval. The one that didn’t make it was “Palace” by Claude Simon, and the more appreciated ones were “drie Rode Rozen” by Abel Herzberg, and “de Gele Regen” by Julio Llamazares. 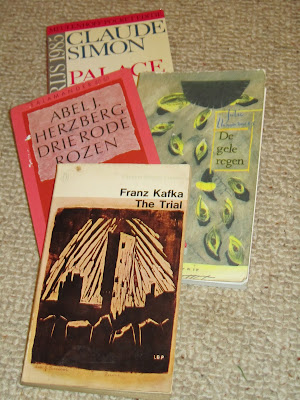 The book by Herzberg (“three red roses”) deals with a Holocaust survivor faced with the question why God allowed this to happen. He finds a metaphoric ally in Job, though this does not help him understand; can God be excused for putting Job through all that for what looks like simply a bet? Just because you’re God, can you just kill someone’s family in a whim? Can you just allow 6 million individuals from some population group be killed off as pests? Of course there are no answers.

“De Gele regen” (the yellow rain) deals with a small village in the Spanish Pyrenees. When population declines and urbanisation beckons it slowly gets abandoned. The story is told by the old man who is the last inhabitant. He sees everybody else leave, but can’t cope with leaving this house, this village, this effort made by generations of his ancestors, which he would have liked to see pass into the hands of the generation after him. A last act of defiance before he too dies and nature takes the village back.

The Trial is the only book I figure everyone reading this blog has heard of. Often read it, I presume. I only knew beforehand it dealt with a bloke who’s arrested without him knowing why, and then the endless quest for any progress in that situation. 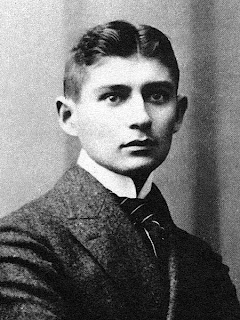 When I started I was surprised at how surreal it all is. It reminded me of “the Unconsoled” by Ishiguro. And when you progress through the book you start to get an idea of what this trial stands for. Along the line you also start to wonder if you get a glimpse of why Kafka himself struggled so much with life. Joseph K. seems to stand all alone in the world, and hardly sees any role other than a strictly utilitarian one for his fellow men. And to the modern eye, he is quite a snooty upper class misogynistic twat. I’m glad I finally got to read it; it was well worth it! Food for thought.

And now onwards, with Hamlet…
Posted by Margot at 17:49