The times of paracetamol and cough syrup aren’t over yet, and therefore, neither is the time for blog-backlog-reduction. Months and months ago, I attended the Second Marine Institute Research Centre Conference, and I was struck by a talk dealing with how the public views the marine realm, and its environmental issues. Some of the findings were unexpected, or somewhat sour, or funny, or a combination of the above. The full title of the talk was “Public interest in ecological health for marine conservation communication: why charismatic megafauna are not always the answer” by Rebecca Jefferson from (then)MarCoPol.
After her talk I asked if she would mind if I blogged about all this. She didn’t; on the contrary, she was so kind as to send me three chapters of her thesis, on which the talk was based. And thanks to these I could now, six months later, finally convey some of that knowledge to my blog.
What she had set out to investigate boiled down to what sort of people know what about the UK subtidal realm, how they know it, in what way they are worried about it and why, and how one should go about if one wants to communicate about these issues with them.
For finding out something about who knows, and worries, about what a survey was held among people in the categories: coastal resident, inland resident, coastal manager, recreation employed, and marine scientist. Interestingly, all groups tended to roughly worry about the same things. Except the managers. They worried about management. Nobody else did; they worried mainly about pollution and overfishing. Managers really live in a different world! 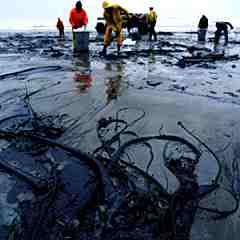 Other findings were that hose with an interest in the marine realm generally had acquired that by rummaging around on the beach as a youngster, even though that often does not involve actually seeing spectacular animals. Documentaries seemed to help too. Scientists were the most concerned about climate change, and inland residents worry about what they see on TV, while coastal residents worry about what they see themselves. Maybe not so surprising. When it came to learning more, it turned out that the best trusted source of information is, (sigh of relief), scientists. Unfortunately; these overwhelmingly mention it does nothing for one’s career (perhaps even the opposite) to engage in education of the lay, so they are quite reluctant to fulfil this possible role. (Yes we have heard this before.) 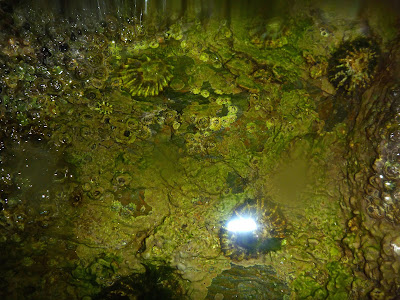 Rockpooling (even at night, as I did when I took this picture) sparks interest in the marine realm!
Addressing the question how one can make people care, the author investigated who is familiar with what UK marine species, and which of these they are interested in. Species actually most relevant to marine health are structural plants and invertebrates, but these might not spark the imagination very much. Flagship species for conservation campaigns tend to be charismatic macrofauna, such as dolphins. They arouse lots of sympathy, and can serve to make something fuzzy as biodiversity easier to grasp. Polar bears, for instance, do a good job of making people care about arctic warming. But there is a catch, of course; in the US there is a positive correlation between charisma of a species and the level of protection it gets under the Endangered Species Act, and a negative correlation between protection and how endangered it actually is 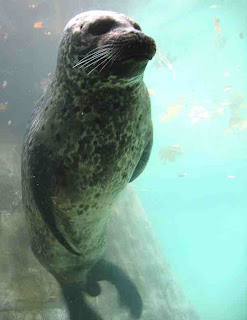 A specimen of CMF (Charismatic MegaFauna)
Source: Creative Commons
When a large number of people was asked about whether they had heard of twelve carefully chosen species, whether they thought these species occurred in UK waters, and whether they were interested in them, interesting patterns emerged. The list covered a range of charismatic and less endearing, ecologically important and unimportant, economically interesting or commercially trivial species. And of course, everybody had heard of seals, puffins and sea horses, and cared about them. Funnily enough, people overestimate the occurrence in the UK of non-charismatic species and underestimate that of charismatic ones; in the general eye, UK seas are seen as low in worth, so they can’t possibly host charismatic species such as puffins. Surely they live in more exotic waters! But dull worms; yes, they must certainly abound in UK waters. There’s potential here for raising enthusiasm for marine protection! A sand mason worm; quite an unloved species from the study
The public might swoon over cute seals, but it is not fooled into believing their presence or absence is the best indicator of a healthy marine environment. However; what you see is what you care about, so though it has no basis in fact, presence or absence of litter on the beach was seen as the best indicator of a healthy sea.
What I thought was the most hilarious finding of this project, was that the results in who is interested in what species were also split out according to gender and level of education. And it turns out that women are interested in cute animals, while men are interested in animals they can eat. Typical! And a university education lessens that gender difference…
Posted by Margot at 21:02

Interesting - In Greenland we often used the term Disneyfication...