I almost hoped the cave rescue call-out would put an end to the caving trip we had scheduled that night. We would go to Afton, and that’s the scariest underground place I’ve ever been. I was so happy to be still alive when I got out the previous time I had tried my skills at this at this intimidating rift! And now I would do it all again, Voluntarily. Unless, of course, we would be needed for a rescue…

But we weren’t. I left the door just as the “all clear” signal came. I went up to Ferret who would give me a ride; quite punctual I rang his doorbell. To my surprise his girlfriend opened the door; it turned out Ferret himself was at the call-out site, and hadn’t told me! Pippa kindly invited me in for a cup of tea, but I declined, and instead rode home quickly. I could still make it in time in my own car!

Quite punctual I arrived at the gathering place, finding Richard, who would lead this trip, and Skip. Lionel and Rupert were on their way. Rupert had been stood up at the last minute by his passenger; this way five cavers had used five cars to get here… but what can one do.

Lionel and Rupert seemed to look forward to the trip. Richard is always overworked, and sometimes only leads trip out of sense of duty; it seemed to be a night like that. Skip and I had only done the trip once before; I think we were both shitting our pants. I sure was!

Soon we clambered up to the entrance and went in. The first few metres are easy, and then the shit hits the fan. The actual rift! A bottomless depth you have to wedge yourself into! Richard and Lionel happily scurried through it, but I was very apprehensive. To my reassurance I found it much easier than the previous time! But when I got a bit spooked at a nasty turn I was glad Lionel immediately clambered to the rescue, wedging himself below me, so I couldn’t fall. 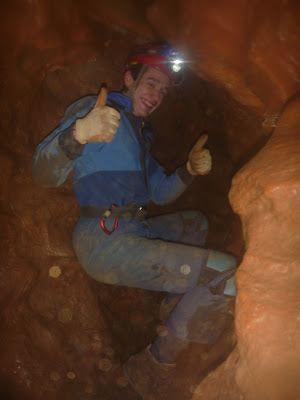 Richard pretending he enjoys this 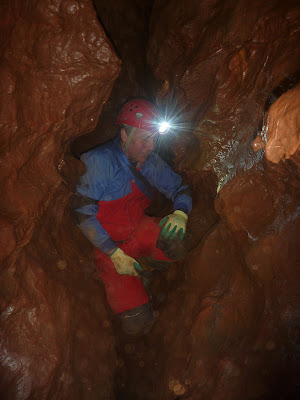 Lionel actually enjoying it.
Note that the men are wedged in, and not standing on anything. 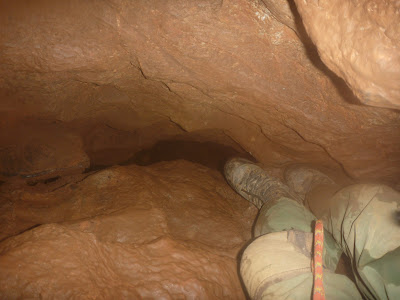 Sometimes there's a rock wedged into the rift; I'm standing on one here

Skip gratefully used this safety measure too, and Rupert came up right behind him, as if he was walking over a red carpet. Once this first rift was passed it got easier, at least for most of us; it gets tighter for a while, which is where things suddenly are easier for me than for robustly built guys such as Lionel. 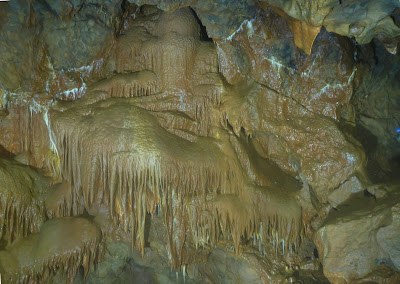 For a while we just happily squeezed and clambered until we reached a tricky drop; Rupert managed on his own, but his face informed me it wasn’t necessarily comfortable. For us it was, as Rupert wasn’t above offering himself as a foothold for those coming after him. And then onwards! 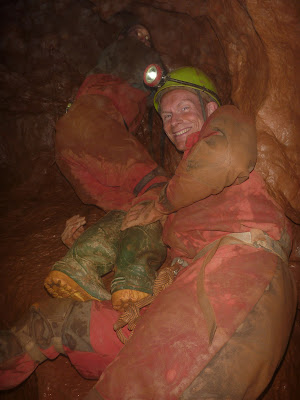 Rupert helping Skip down
We had already noticed the somewhat fresher air, indicating we were coming close to the entrance again, and soon we came to the squeeze that heralds the approach of the very difficult last climb. Lionel commented on the three “stick insects” that effortlessly had scurried through the quite tight squeeze before him. He himself saw the need to utter a profanity or two when he managed to pull the plug out of his headlight twice in a row. But soon after that we all reached the bottom of my nightmare: the same rift as in the beginning, but now done vertically. Richard was up before anyone could say “rift”; I would be next. From above Richard offered to belay me; I did not have to think about that one very long. Yes please! This climb still freaks me out. There’s room enough to climb up, so room enough to fall down! And the only thing that keeps you alive is the friction between the soles of your shoes and the slippery wall. And there’s nowhere you can take a breather. Help! But once you’re on a rope it’s OK, of course. If I have the choice again next time I think I want that rope again. I can die another day! 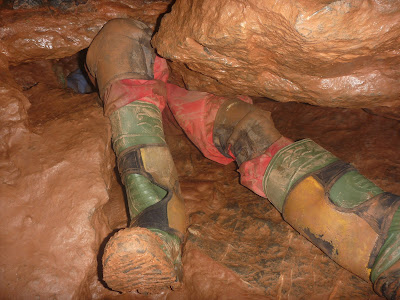 Lionel going into the squeeze
Before I had managed to pass by Richard without engaging in too much sexual intimidation Rupert was up too. We went out, making space for the other two. This time the elation of survival was quite modest! Everything but the climb had been quite acceptable, and the climb had been made easy by the rope. Still I was glad to be outside again.

After a while the other three came out too. We had taken our time; we would have to hurry to still find a pub. And hurry we did, but both pubs we tried were closed. Oh well. I would just go home and wash my hair! And admire my bruises. I would hurt practically everywhere the next day. But it had been worth it. And the next time it will be yet again a bit less hard and dauting!
Posted by Margot at 12:51