Waiting by the phone

What a difference one little text message can make. I was just chasing down some relevant literature, and the occasional mug of coffee to go with it, when suddenly I saw a message from the Cave Rescue Team. We were summoned to stand by! More information would follow.

I grabbed the literature I had obtained and made my way home. I got my caving kit together, made sure my phone was at hand, and started reading. Another message came in, asking us to stay standby. But no details followed anywhere soon.

It happened to be Tuesday, so we had a regular caving trip coming up. I was wondering if we could still do that. When would we know whether we would be needed? I sent a text message to our rescue coordinator, who promptly phoned back.

I got more news now. What had happened was that a group of cavers had seen a light on the bottom of an underground body of water in Pridhamsleigh Cavern, near some unidentified yellow shape. Yellow is a popular colour for caving suits! So they had sounded the alarm. 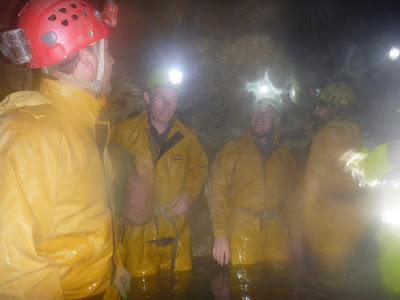 Lots of cavers wear yellow! I do too, but that isn't so conspicuous...
Pic from trip in autumn 2010
As far as I understood it, our afore mentioned rescue coordinator had gone up there, and summoned the people on the first call-out list to stand by. Some had decided that standing by was too boring, and had shown up anyway. These eager beavers were then employed as Sherpa’s and guides for some divers that checked whether there was some hapless drowned person in that little lake.

By the time I heard all that it looked like there was no victim, so the caving trip might still be on. After all, if something would change after all, they could still summon us back. So I got ready.

Just when I got out of the front door I received the “all clear” message. Evidently it was now certain there was no body in there, either alive or dead. So in the end it had all worked out: we had done our rescue job, but I had as well spent half the afternoon working undisturbed at home, and even our caving trip was still on. So that was it; now we could go off and get into underground trouble ourselves!
Posted by Margot at 10:16