Return of the Native

Take Wuthering Heights, mix in some Anna Karenina, and what do you get? The return of the native, by Thomas Hardy.

Hugh had prodded around a bit in my sense of aesthetics, and had found enough windswept wasteland there to give me this book (and Dostoyevsky’s “the idiot”, but I haven’t read that yet) for my birthday. And when I fell ill I had a chance to read it. 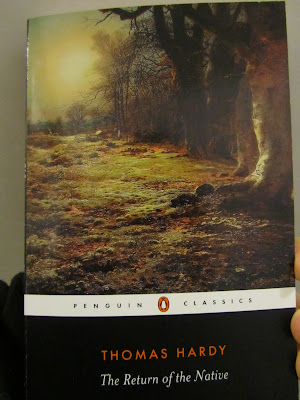 It starts with a very gloomy description of the fictional Egdon Heath; beautiful! And this sets the scene for a narrative where decisions on marriage, not taken after sufficient consideration, end even worse than in Emily Brontë’s classic.

I liked the modern relational bungling up of the main characters; this hardly felt 19th century! But of course, it was 19th century, and that means a lot more is at stake. So trouble was brewing. And it didn’t let anyone wait.

After a while I got a bit fed up with Hardy’s tendency to really let everything go as wrong as it possibly can; everything is timed to perfection to do the most damage. Of course that letter is delivered late, of course the suspected lover and the suspecting mother end up at the cottage at the same time. Of course everybody is asleep when they shouldn’t and awake when they shouldn’t. Of course there are always prying eyes, which will sooner or later release their knowledge. But just as I got tired of the gimmick it ended! And Hardy very elegantly lets one of his own opportunities to throw a spanner in the machinery go by unused. Even though a footnote suggests he had to make a serious effort to do so...

An interesting thing about this book is also that it was not published in one go; it started as a series in a magazine, and many versions exist of the text, which show how Hardy was, till the very end, tweaking the social status and moral standing of his characters. In a way, you can choose yourself here, which version you prefer!

So whoever is looking for a book with plenty of rainy, dark, thorny hills, and marital choices leading to agonising downfall, and well-meant attempts at social reform that are doomed from the start (here comes Anna Karenina, or rather, Kostya), the clash of dream and reality (Anna herself, here!) I can recommend this book! And yet again, I got reminded of what a great improvement it has been that women now have a life of their own. I might be a hopeless reactionary, but this is surely an aspect of modern life I thoroughly appreciate!
Posted by Margot at 12:47