Sometimes a disk of resin an inch wide and a centimetre thick can be the centre of the world. If it has many hundreds of volcanic ash shards inside it, which took many days of preparation to get them there, it sure is.

Excited I came to the lab. The resin would have set, now we would have to find out if we could be able to prepare my tiny, tiny ash particles, which were much smaller than this lab had ever dealt with. Donald, the lab technician, cut the resin disks to size, and then it was time to polish them. The idea is that you plish away resin-plus-sample until you have the shards exposed at th esurface, after which you can anlyse them. It sounds simple! But it turned out it wasn't. 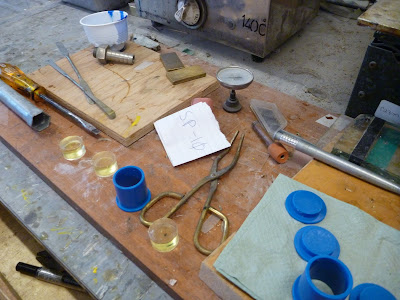 The freshly made resin disks 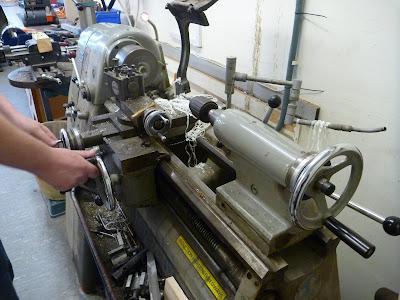 First they're cut to size
I started with one sample of only ash shards, and one bulk sample. Both turned out to have a slightly raised rim, which we should get rid of in order to get to the flatter inside where we would focus the analysis. After lots of tedious polishing with a 6 micron sized abrasive we figured we might need some coarser methods to get rid of that rim. So we got griding. 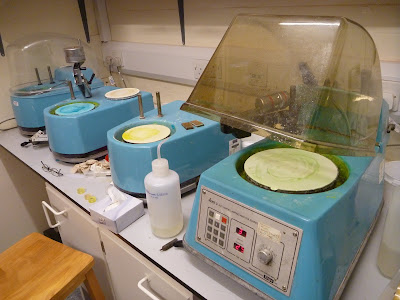 The polishers: yellow for 6 microns, green for 3 microns, blue for 1 micron...
I removed the rim and polished on, with my 6 micron abrasive. Hour after hour passed, and no ploished grain came into sight. Until Donald sounded the alarm.

He noticed that we were losing grains. It turned out the 6 micron abrasive would lift the ash shards out of their resin matrix as soon as they came to the surface! So waiting for polished surfaces to appear would not work. We would have to polish with a finer abrasive, but that way it would take days to get rid of rims and blobs in the resin surface.

Donald had an idea. We should cut off the rim with violence, and then only polish very finely; that way the shards may stay put. And thus happened. Lo and behold; only minutes later I had polished grains in sight! And the resin was so uneven not all of the grains would be at the surface at the same time, so I would have to analyse, polish again, analyse, and so on until I would have analysed the deepest lying grains, but so be it. The actual measuring will be the proof of the cake, but it looks like we've cracked it, and that means we've cranked up this lab to the level of Edinburgh, where we Plymouthians had previously done our analysis! Not bad. 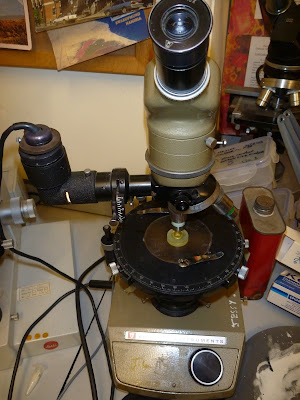 The beautiful old microscope with which I check the samples 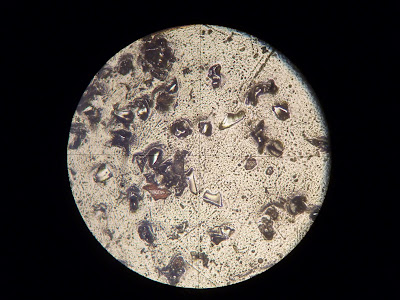 Polished grains!
One would almost forget the mission is only really successful if we find the very specific ash we're loking for. But if we manage to get proper results of any ash shard I'll already be quite chuffed!
Posted by Margot at 08:43