The text message from the hike organiser with the name and contact details of my mountain guide for the next adventure made me believe I would be negotiating the thin air with an actual Swiss this time. And indeed! As he didn’t have to come from far away we gathered at the same place where I felt I had met my glacier companions ages ago, but this time at 9AM. This meant taking the busy train up. And soon I shook the hand of Daniel, the guy who would lead me beyond 4000m. And soon as well the hand of Maria, the Brazilian lady and other participant. Minutes later we were standing outside. 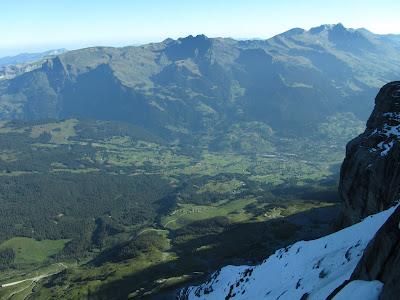 The view from station Eigerwand; it's Grindelwald! This is the window I could see from my tent. 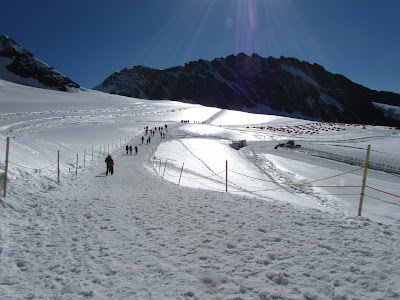 The surroundings of Jungfraujoch were bathing in sunlight again. Notice in the distance a grid of tents; this was some encampment where equipment by Mammut, which celebrated its 150th anniversary, was tested.
With no chance of starting at 7AM we had missed the firm snow. In the heat we geared up; this time we would be wearing crampons from the beginning. This time I had made sure I had brought my summer gear; a thin shirt and white sleeves. No sunburn, but no heat exhaustion either! 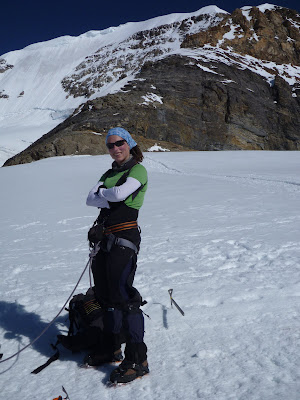 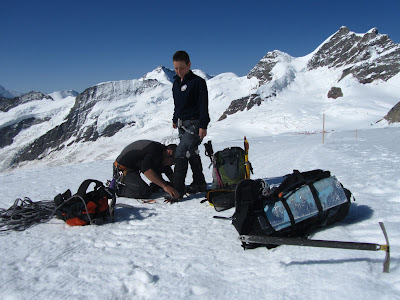 Maria is helped into her crampons
Maria was loudly wondering why on Earth she had gotten herself into this predicament, so she got roped in in the middle. Daniel kept a very short stretch of rope between us; I would spend quite some moments fearing I would get Maria’s crampons in my face or through my hands, but it never happened. And we were off. From Jungfraujoch you can just walk to the ridge of the Mönch that leads to the top, so soon we were trudging through snow with steep slopes on both sides. But it would get better; here and there the rock peeked out through the snow, and that had to be climbed with crampons on. A bit awkward! But you get used to it fast. 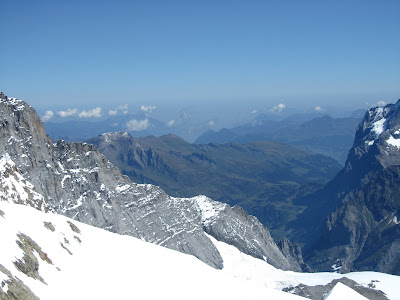 The view soon is beautiful. 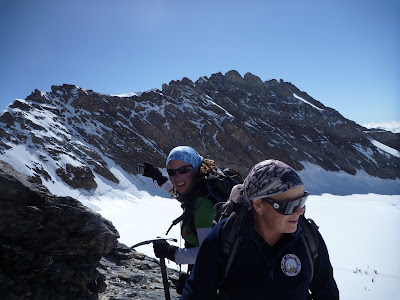 After a few intervals of snow and rock Daniel announced a break. I decided it was a good time for a cup of coffee, and made it happen. While we were thus engaged one rope group after the other came past; on such a beautiful day many people venture up. One man leading a group started sniffing conspicuously when he came past: he smelled my coffee! I offered him some, which he happily accepted. Daniel didn’t want any; he said it would make him need to go to the toilet. A fair comment; it was already two hours since Jungfraujoch, and I was already starting to feel the pressure. A narrow ridge at altitude, however, is not a good place to do something about that, and Daniel wouldn’t let me. Luckily I have a strong bladder. 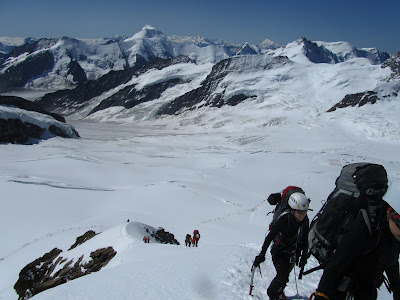 Many rope groups on the ridge 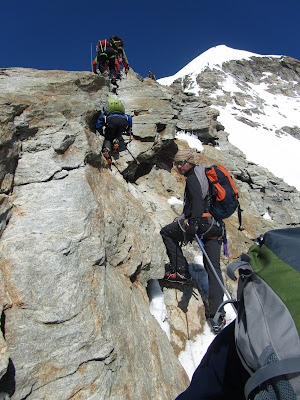 Climbing on crampons; the bloke in the stripey hat is Daniel, our mountain guide.
Soon we were on our way again. More snowy ridges, more clambering over rocks; sometimes doing a little rope-avoiding dance where many rope groups going in both directions met. But climbers tend to be kind and social people and all was well. 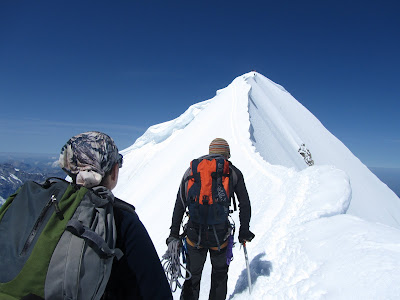 Going to the top! 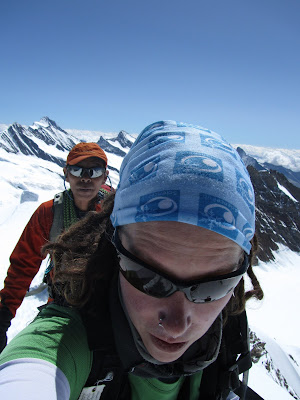 I have to look where I'm going and can't look into the camera, but that doesn't stop me from taking pictures. Accidentally also of a Japanese rope group just behind me. 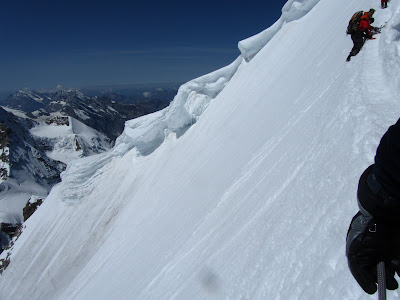 One has to make sure not to stand on these overhanging slabs of snow...
Fairly soon we were up. 4107m; my personal record! Only 145m higher than the Äbeni Fluh, but still, a record. We wouldn’t stay long; it was way too busy there! But there was time for mountain top kisses (that either is a Swiss tradition, or Daniel made us believe that; either way, I’m Dutch, I’m not complaining), some pictures, some admiration, and something perhaps to eat and drink. And then we accepted the way back.

The view from the top! Once again the Aletsch glacier. 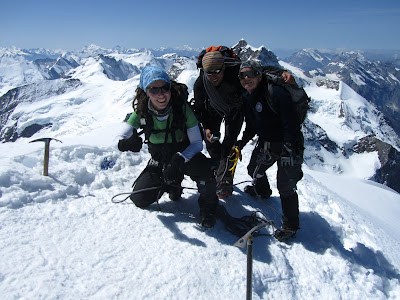 Mountain guides always go on top; on the way up they lead, on the way down they guard the rear. That meant I now was the bellwether! I liked the job. I soon got a feeling, through the tension on the rope, how fast i should go so Maria would be comfortable too. The snow was really soft now, and we did a fair bit of sliding, but nothing disconcerting. 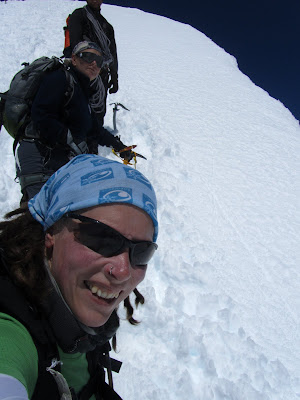 Some bits are steep 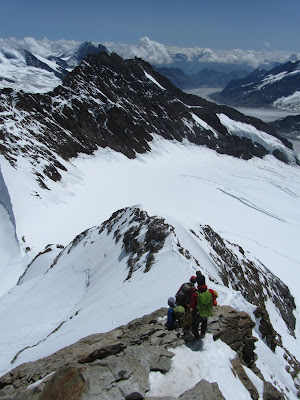 When we reached the first climb down I realised halfway Daniel wanted us to abseil down, instead of climb down. I preferred climbing, but I am an obsequious girl and sailed down the steep rocks at high speed. And as walking down the snowy ridges is easier than walking up we made good headway. In a way it was a waste to rush down; one should enjoy such a mountain! On the other hand, I was getting fairly fried by the relentless sun in the thinner-than-ever air. And around 2.30 we were down again. I made sure the first thing I did was empty my bladder.

Daniel had other things to do, and was off after some more kissing. I was hungry by now, and wanted to have some lunch with the stunning view, which I would soon have to leave. Maria wanted to be out of there. 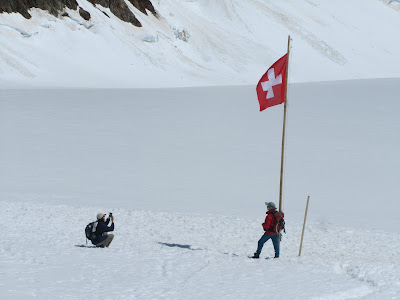 Back down! We started at this flag.
Eating my sandwich I noticed I had really been blasted a bit too much by the sun. I decided to not stay long, but instead head back to the railway station. When I reached it I saw to my dismay that half the world seemed to want to have that train; obediently I took my place in the queue, waited more than half an hour, entered the packed train, and tried to sit down without hurting anyone with my crampons and ice axe. The adventure was over! 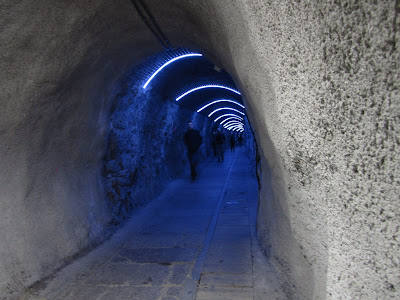 The dark tunnels bring solace from the bright sun 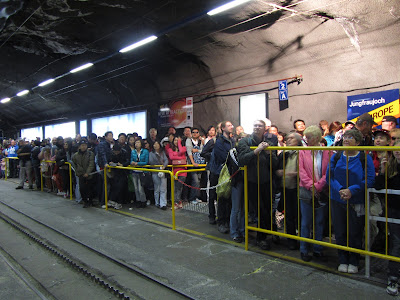 I wasn't the only one who wanted to go down again...
I ended up chatting with a Genevese couple, which was good as I had decided to go to Geneva the next day, and around 6PM I was back in Grindelwald. I managed to give my equipment back at the officially closed office, and acquired some information on Genevese camp sites. Mission accomplished! Time to go back to the camping.

At the camping people gave me strange looks. When I looked in the mirror I figured why; my eyelids were massive. I looked like I had been crying my eyes out! I really had been fried by the sun. It didn’t feel very comfortable. When I got a text message after having gone to bed the looking at the radiant little screen made my eyes hurt, and made them water even more. 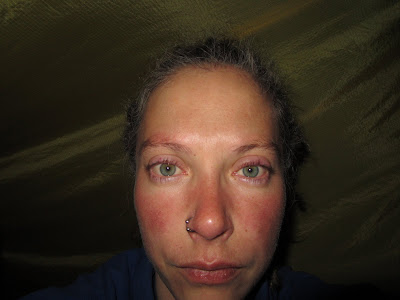 The having-cried-all-night-look I ended ip with...
I think I need new sunglasses... I had had a good time, and these should not be the last glaciers and mountains I roam! But next time I should come off looking like I’m actually enjoying myself. Since I am!
Posted by Margot at 20:00