All work and no play? No!

Tourists come from all over the world to see the venerable, ancient beauty of St Andrews. I spent almost a mid-week there, and have only blogged about what went on in the labs, one of which was even blinded. But I did get to see some of it, and it’s worth showing! 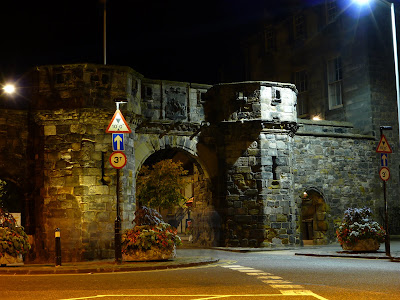 One of the scenic city gates
When I arrived on Monday night it was getting late and I was hungry, so I didn’t get more done than having dinner and checking into the university hall of residence I would stay in. The next day was for mounting samples on a thingamabobby; in the late afternoon a technician would pour the resin, which would set during the night. So as soon as I delivered my samples I had nothing more to do in the lab. So what does one do under such circumstances? Have a stroll around, and a run on the beach! 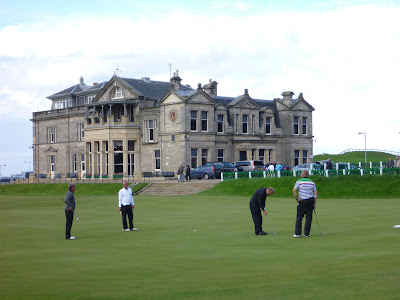 What probably is the most famous face of St Andrews: golf snobs. 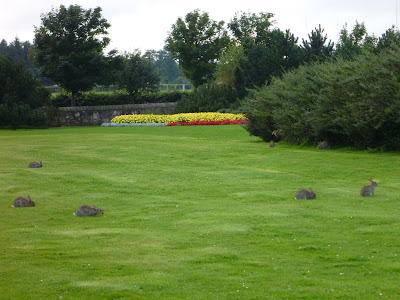 These seem to be the primary inhabitants of the residential part of the campus during summer. The last night when I walked home I saw 35, and it's a short walk!
St Andrews is mainly famous (beside the university, but enough about that for now) for its cathedral, or what’s left of it, the castle, or what’s left of that, and golf. The latter doesn’t interest me so I went for a stroll in the hesitating sun (it had been raining all day) past the ancient landmarks. Very impressive indeed, I must say! And picturesquely perched on the cliff coast. 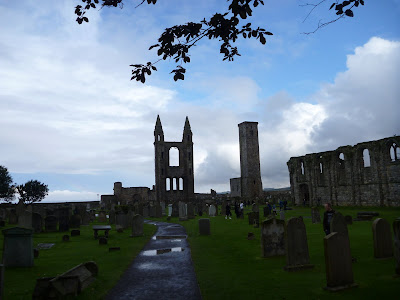 There's not much left of the cathedral 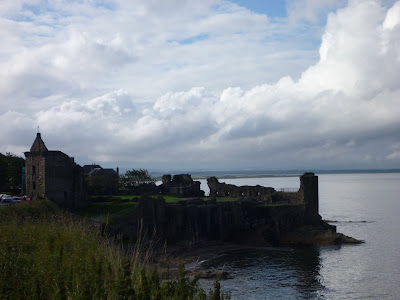 The castle is at best marginally better off
The town is quite small, so I had time left for a run, and I had already seen St Andrews can boast on a nice beach, so I tried it. It was a good run. You can go a fair distance, and at the end not only very soft sand awaited me, but also an amazing view. Scotland has been good to me! 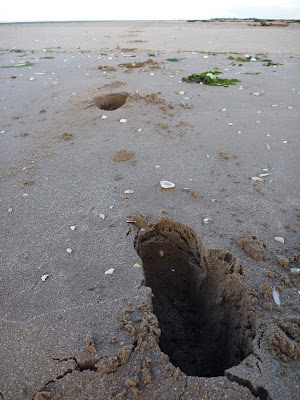 It was a nice run on the beach, but the last few metres were a bit trying. 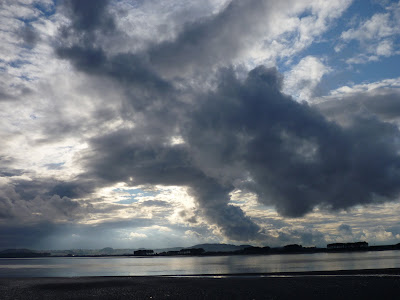 Braving the sand was worth it though: this was the reward! 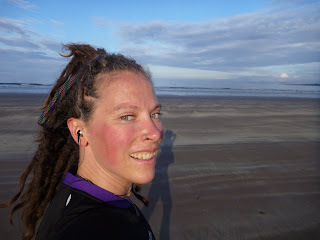 The sunnier run back 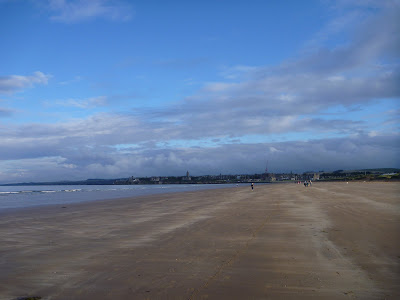 The beach with the St Andrews skyline
Although there clearly is a time for indulging in tourist behaviour, there also is time for less photogenic activities, such as having a pint with fellow scholars. Fiona, my future colleague, had heard of plans for a swift middle-of-the-week half, and she kindly arranged contact between the pub dwellers and me. So on Wednesday I entered a pub, found the right batch of complete strangers, and had a very pleasant pint with them. Scotland is being kind to me! And the day after I had dinner with Fiona herself. Nothing wrong with haggis-and-goat’s-cheese pizza! And after a few days spend like that I’m looking forward to most likely being back quite soon...
Posted by Margot at 18:22