Glaciers as far as the eye can see II

(Continued from the previous post)
It was midway my post-conference glacier hike, I was lying in a bed in a hut at 3240m, while before this Alpine adventure I had never been higher than 3000m, and I had another restless night. Not only because there was a snoring German about 1.5 metre away; mainly because of the thin, dry air. I woke up with a headache. Gordon, our Scottish adventurer, felt even worse. Stephan didn’t suffer from the altitude, but he was burdened by his imminent return to work, and both men decided to skip the next leg of the hike: to the Äbeni Flue and back. I just drank my headache away with coffee and was ready to rock. Kristin even didn’t need to drink anything away; by 7AM Stefan the mountain guide had roped up his ladies and we were go. This day the landscape was even whiter and more magical than before. 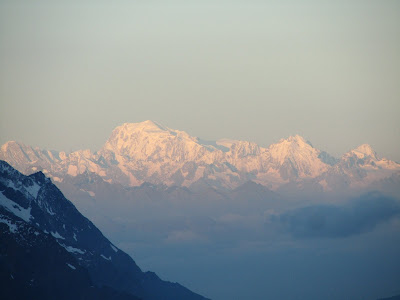 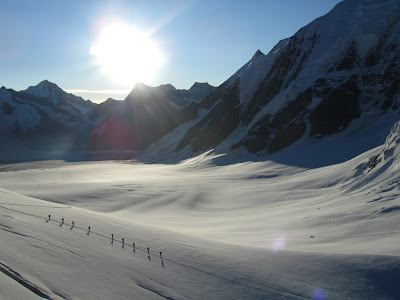 We were gone by 7, but another rope group managed to be gone even earlier 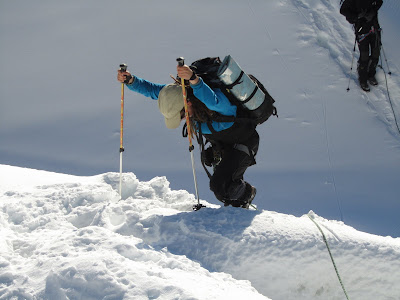 The first part of the route was steep 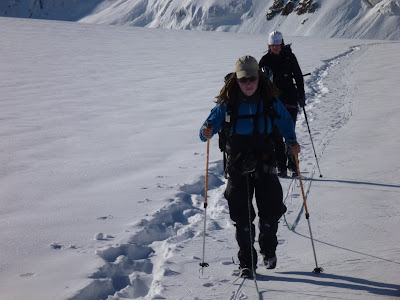 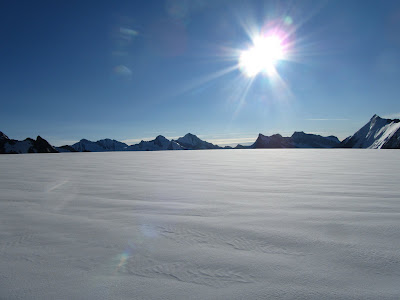 The fairytale landscape we traversed
At this early hour the snow was still hard and easy to walk on, and at ~9.30 we were at the top, at 3962m. The view was amazing! We admired it for an hour, eating and drinking something as well, and then we went back down. Kristin was in the lead and she legged it. Even though it was a hot day (I was grossly overdressed but didn’t dare take anything off in fear of sunburn), the snow didn’t get mushy until we were within a few hundred metres from the hut. Before midday we were back!

Way before the top the view was already stunning 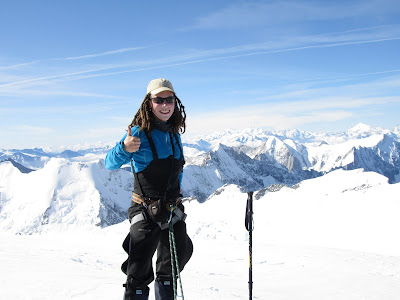 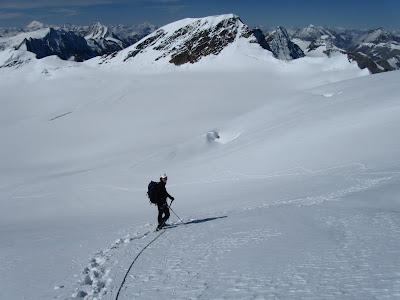 There was a trail made by a party on an earlier day, but we had made a prettier one with more zigzags 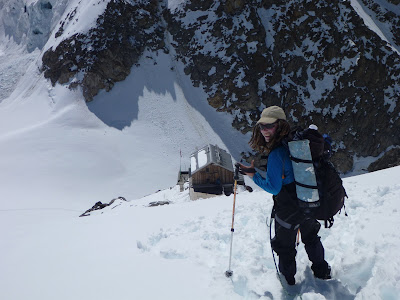 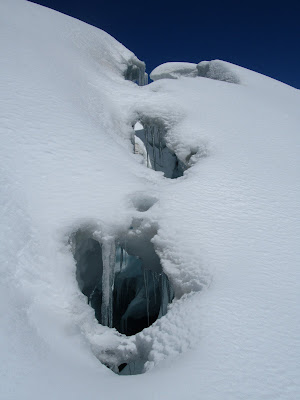 Crevasses can be really pretty.
We were greeted by the sight of Gordon and Stephan in deck chairs drinking beer. They didn’t expect us back that soon! But minutes later we had a beer in front of us as well. And then Stefan vanished; on this hot day he wanted to give a snow shower a try. I’m spreading the faith! Of course he liked it. I took the next turn; just in time, or just too late, for good manners; I was just dry when a rope group appeared around a bend. Not sure how sharp their eyes were but I made sure I hurried on some underwear...

Sitting in the sun sipping a beer Stefan, who knew I was up for another glacier hike after this one, said he thought I shouldn’t. He said it would be too boring; I should go climb a 4000+ mountain instead! The same organisation that offered the glacier hikes also offered guided ascents of the Mönch, and he said I was a strong woman and do that instead. I was flattered, saw his point, and got the relevant phone number off him. The lady on the phone quickly figured who I was and uttered her surprise at my initial choice, and agreed with Stefan that Mönch would be a better idea. They climb Mönch with one or two tourists per mountain guide; one on one is unaffordable, and they didn’t have anyone lined up for the coming days. I would have to phone later...


The altitude and the heat had taken it out on me; I decided to have a siesta, and by the time I reappeared a game of Cockroach Poker was already laid out. And then dinner followed. And more beer and an evaluation; we were all quite happy with how things had gone! For Stefan it was a first timer to have a mixed German-and English-speaking group, but all had gone well. And on that note we did some more cockroach-related lying to each other, and then it was time for bed. And indeed reader; another restless night with dry mouth and fast heart rate. Oh well. Next day the coffee would sort it again. 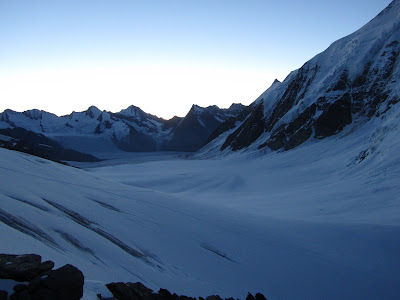 The view in the early morning
The coffee did what it was supposed to do, and the next day we were again on the move at 7AM. Our itinerary would be simple: just down, down, back to civilization. And it went fast; again the snow was still hard. Where the snow vanished and the ice appeared we put on our crampons for the first time; the ice was rather rough, but here it was so steep that some extra grip would not be superfluous. Still in the shadow we walked the last ice of this fading glacier. And soon after we reached the sun we not only found the first flowers, but also reached the terminus of the glacier. It was majestic; the ice opened up in a wide vault, through which a stream flowed. I was in awe. Stefan saw me look, and asked if I wanted to go in. Go in? Is the pope catholic? 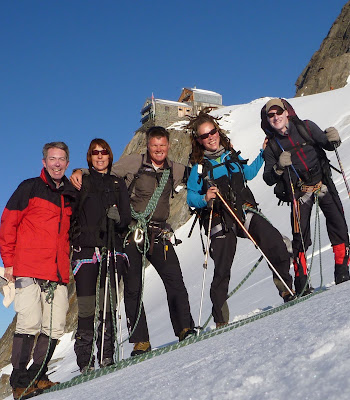 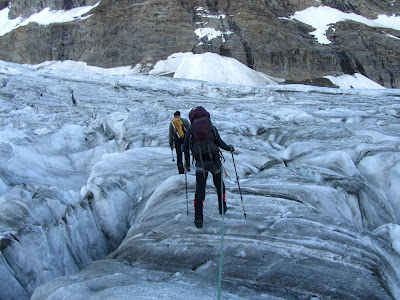 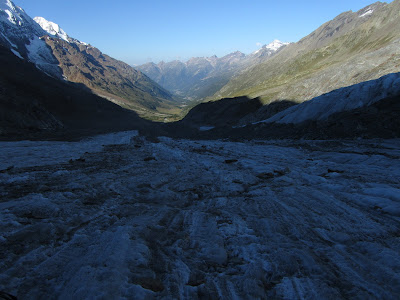 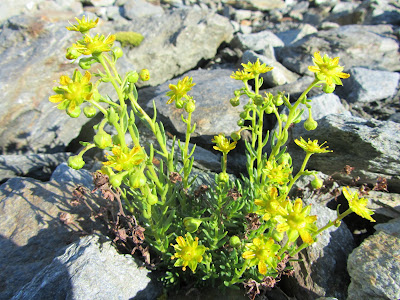 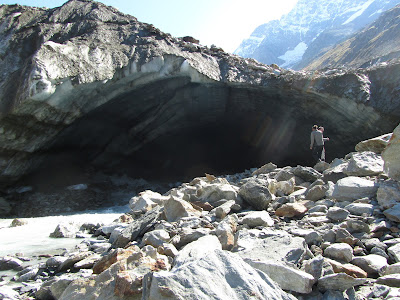 In what way is a melting glacier different from an abandoned mine? They both are inherently unstable. And so far I get away with running around in both. The tunnel was spectacular! I was in my element, taking pictures with my otherwise hardly needed waterproof camera. And soon the glacier gave a warning; with deafening roar part of the wall collapsed. Not a part near us... but it was a reason to not linger too long. 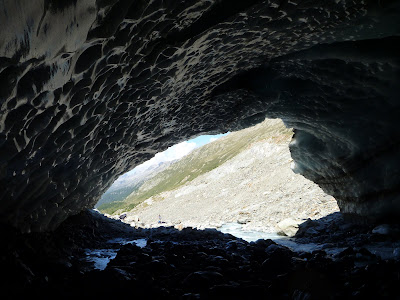 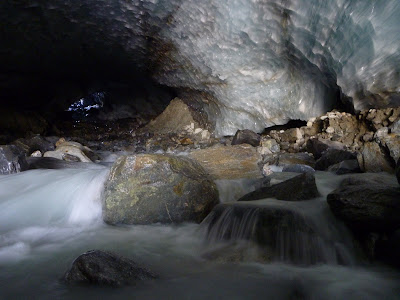 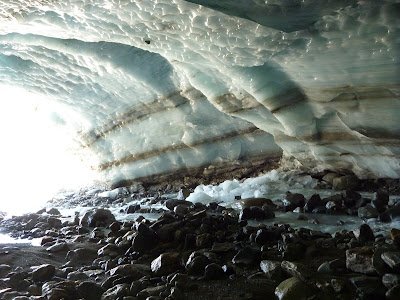 The pile of ice is the stuff that came down while we were there!
Once out of the glacier I changed into my shorts, and had lunch. And then we were off again. Stefan seemed to smell the stable; he marched to the nearest hamlet with determination. Maybe it was the beer served there that urged him on; thanks to his speed there was just time for one bottle before the bus took us further down. The hike was at an end! Sad. But that’s how it goes. 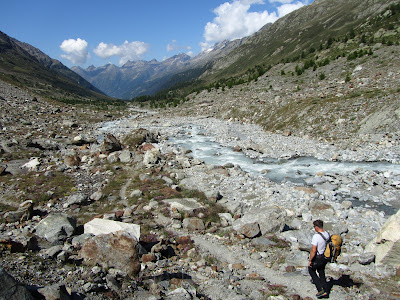 The glacier had made way for a stream, and the jackets for T-shirts 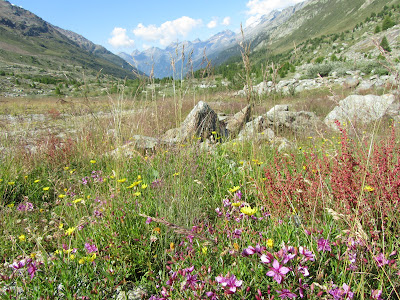 Back into the gratuitous Alpine flowers! 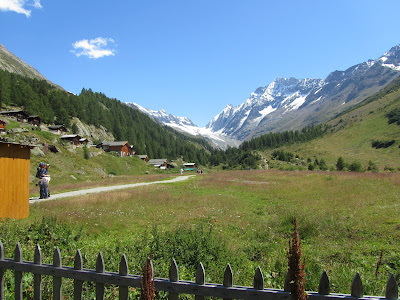 And then it was over; I took this picture from the bus stop in Fafleralp...
The bus took us to the train, and the train took us to separation. In Spiez Gordon, Stefan and I got off, waving the Germans goodbye. Gordon stayed in Spiez while Stefan and I had to go on to Grindelwald, so he was the next to be hugged goodbye. And then there were only two. In Grindelwald I suggested a final beer, which was met with enthusiasm, and then we went together to the office where we could give the equipment back, and where I could inquire after the Mönch climb. And it worked out! They had found another woman, and we would go up the next day. Excellent! It did mean I could immediately take back the crampons and the harness...

Excited I said goodbye to Stefan, bought some extra strong sun cream, and went back to the camping. I pitched my tent again on the now very full camp site, ate something, and went to bed early. Finally, a night below 1000m! I was in bed by 9. And I woke up again at 10.15. It was August the 1st; the Swiss national day! Fireworks lit up the evening sky. I admired them for a few minutes and went back to bed. I was glad these Swiss celebrate with poise and constraint! Undisturbed I slept off the first part of my Alpine adventure. I needed strength for the second...
Posted by Margot at 19:20