Time for repair and cleaning

Microbiology is fascinating, but it should stay out of your water bottle. It doesn't, though. I had a thought lingering in my mind for a long time I should clean the tube and mouthpiece of one of my water bags, but when I had a closer look at in in Switzerland I realised that thought needed to move forward. Both were clogged with evil-looking algae. I took the mouthpiece of and did what I could with my toothbrush, but the effect was limited. And I had no way of cleaning the tube. At home I would have to do a more thorough job...

Once home I pondered what to do. Cleaning a long tube can be tricky! I decided I would have to get a tread through, then attach a piece of chamois leather to the string and pull it through a few times. And just try any available violence on the mouthpiece.

A piece of thread will not feed through a damptube like that; one needs something of high density to aid its progress. But what is heavy enough to do the job though small enough to fit through? I had it; the small nuts I had bought for my camera repairing spree! It worked. The algae, though, were not willing to entirely evacuate the place. I might introduce some chemicals there. But for now it will do. 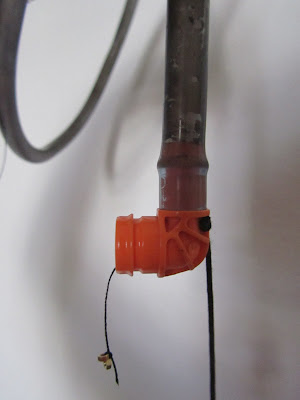 My cunning solution. Notice the flaking algal mats inside the tube!
While cleaning I noticed, though, that the endless biting on the mouthpiece had actually resulted in me biting through. That solves the cleaning issue! I'll just chuck it. I have ordered a new one. My water bag will soon be as new!
Posted by Margot at 08:44

I think £20 for some brushes and some detergent is silly! That's a penalty for not being inventive...