I had hiked four glaciers and conquered two mountain tops. But now it was time to get back to normal. Unfortunately!

The morning after my Mönch adventure I woke up, took it easy, packed my stuff and said goodbye to the very kind lady at the campsite reception. And then embarked on the trip to normality. 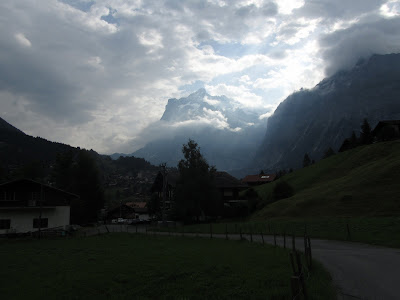 Dramatic skies guide me on my way to the railway station
Originally I would be one day longer in the mountains, get back to the campsite, and then the next morning get up really really early, and go directly to Geneva airport. With the changed plans, though, I could take it more easy; I would get to Geneva the night before my flight, and could have a lie-in.

Soon after I entered the train to Interlaken the rain was hammering down. I had left in time! All the way to Geneva the trip was otherwise very uneventful. In Geneva, however, I had to somehow find my way to the camp site. There were issues with a bus you had to phone; the camp site was quite remote. And there is a lot that can go wrong with that. To summarise: the trip that should have taken me half an hour took me about two and a half hours. But I got there. 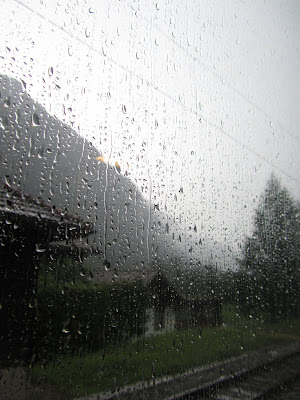 Not Switzerland at its prettiest

I got to the very quiet camping and pitched my tent. Soon later a chap in a caravan offered me a beer. A beer! Chaps in caravans might not necessarily be best met with encouragement, but I craved a beer… and it was even nice to have a beer with the guy, and chat a bit. He also showed me the river next to the camp site. But that had probably been too much; I spent the rest of the evening actively keeping to myself, as he got too pushy to my taste. I figured until then I had been quite lucky with who I’d met… 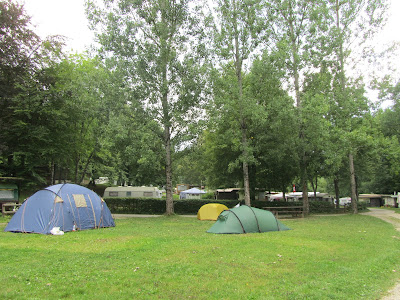 My tent on the final campsite
The next morning the chap was gone, and I spent my last hours with another tourist from the UK, who occupied the tent next to me and who was on biking holiday. That was better! We helped each other finishing our supplies (he would fly back that day too), and together burned off my excess fuel (not necessarily in accordance with strict H&S standards, but hey, it worked). And then it was time to go to the airport…

I used an abandoned check-in counter to weigh my backpack. It was 1.2 kg too heavy! Luckily my pots, pans and filling were 1.2 kg, and I had space in my hand luggage, so that was easily solved. And then I could read Dostoyevsky until I touched down on UK ground again.

Neil had kept his Saturday free for me, which was great, but it was only Thursday. Luckily he texted inquiring after my whereabouts that very evening; his activities for the night had been cancelled, and he had time for me! So my bag was left half-unpacked, but only a few hours after reaching Plymouth I knocked on his door. It’s not the same as standing on a 4000+ mountain, but it’s very good as well! I think I can get used to being back… 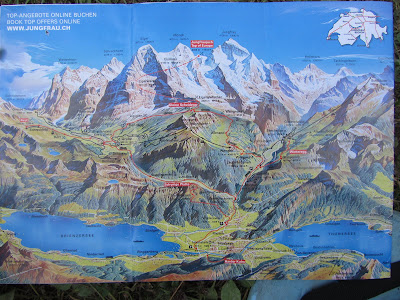