Glaciers as far as the eye can see Part I

On the day I would start my 4-day glacier hike it wasn’t raining. A good start! I got up, had breakfast, packed the stuff I didn’t need up there and stored it in some room kindly provided by the campsite, and went to the railway station. The route is very scenic, until it goes underground. It does have, as the window in the Eiger bears witness to, some stations with a viewpoint. I sat next to some Germans, who had done a similar route the days before, and who showed me some very enticing pictures. I hoped I would see some of that too... at one of the stations one of them got out, went to the viewpoint, came back, said “nur Nebel” and sat down again. Hmm. 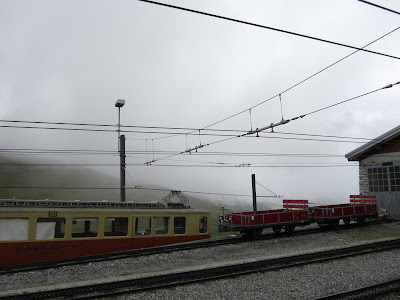 The railway station where it all started 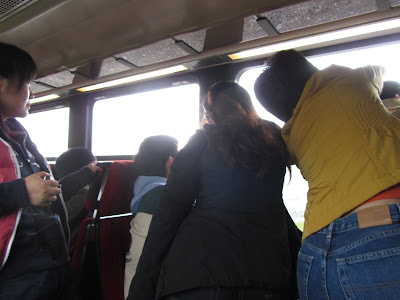 With lots of Asian tourists this is in practice the view
The last viewpoint before Jungfraujoch I gave it a try too. We had ended up above the clouds! The weather was brilliant. This might be better that I had expected. And when I got out at Jungfraujoch it was brilliant still. I enjoyed the view for some minutes before I went to look for the guide we would meet there. When I arrived at the meeting point I saw a very outdoorsy guy; it turned out not to be the guide, but it was one of the other participants: Gordon, a Scot. Minutes later another outdoorsy guy appeared, accompanied by a ditto woman, and he introduced himself as Stephan. The guide, this time? No; another participant (or rather two), just by coincidence carrying the same name. This was a married couple from Frankfurt; the lady was called Kristin. The next to show up actually was the mountain guide, who announced this was it; we would be 5 in total. He quickly distributed crampons, snowshoes, and whatnot, took us outside, tied us into the rope, and led us into das Weisse hinein. 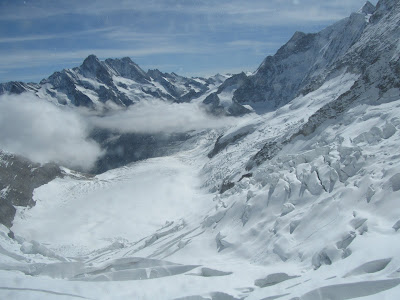 The view from station Eismeer; that's more like it! 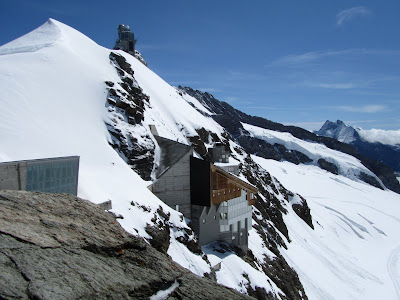 Jungfraujoch with its railway station and observatory 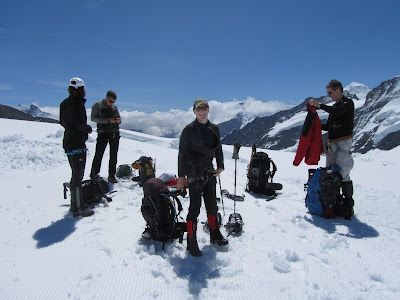 The rope group kitting up! From left to right: Kristin, Stefan, Gordon, and Stephan.
The first day we would just walk down the Jungfraufirn to the Konkordiaplatz, where four glaciers come together, and above which the Konkordia Hut towers. The sky was clear, the view stunning, the walking good. Gordon turned out to be an excellent crevasse detector, to his slight embarrassment, though it never got dangerous. Stefan made stepping over the crevasses, whether clearly visible or not, look easy with his long legs, but I soon found out it actually was, even with short legs. What he can step over I can jump over! I was a bit intimidated by the relentless sun and the thin air; I needed to keep drinking to avoid a headache. But it was beautiful! 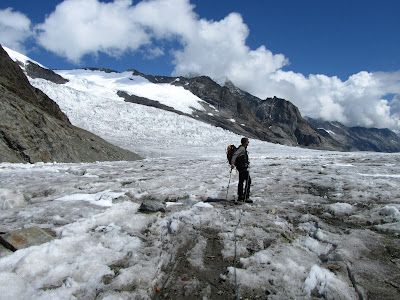 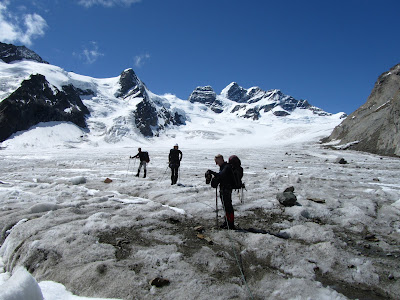 And my view back
We didn’t walk straight; in order to avoid having to cross a substantial stream at the glacier surface we kept to the northeast, crossing the Ewigschneefäld. And then we were close to our goal! The Konkordia hut was built in 1877 right at the glacier, but in the 134 years that had passed quite some ice had melted, and now the hut was perched on a bone dry rock about 150m above the glacier. A steel staircase had been bolted into the rock, and every few years they had to add some more to the base. It was quite a climb in the thin air, but then we were rewarded by an amazing view! And a beer. What more does one want. 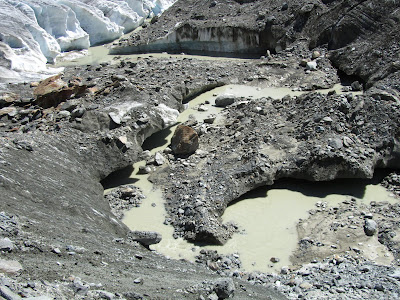 The stream we wanted to avoid. It's difficult to guess the scale, but one could easily kayak on it... 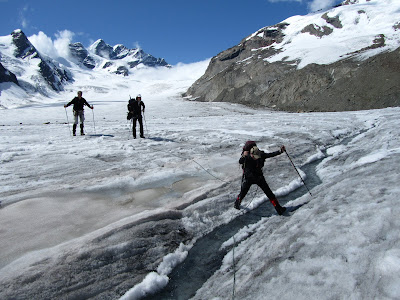 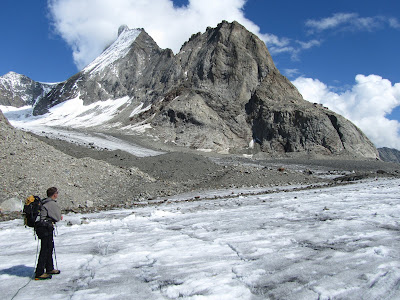 The hut is in sight! 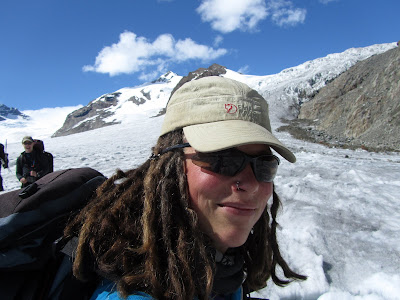 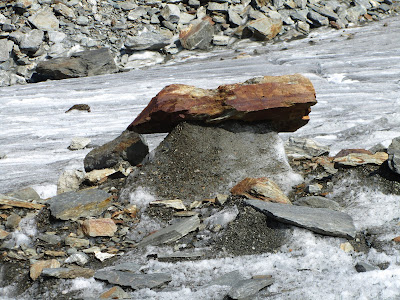 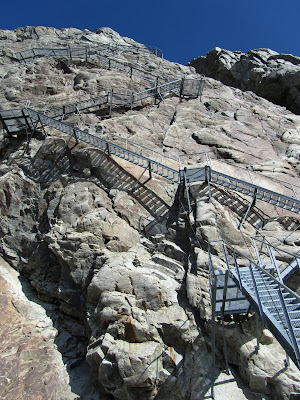 The view from the hut: the Konkordiaplatz! 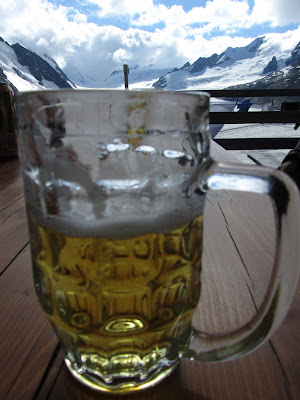 Well-deserved!
Soon it was dinner time. I managed to wash before then; a luxury, as there is hardly any water there, but there was a wash cabin with a small trickle. Enough! After dinner I did find out another disadvantage of the location of the hut: drinking water was CHF 5 per litre! With my normal water consumption pattern this would turn out to be a very expensive trip. But what can one do. 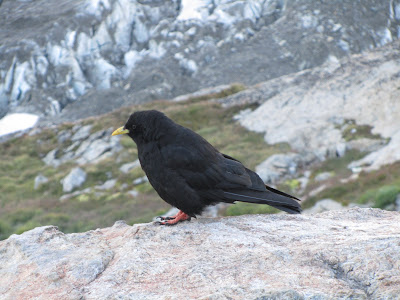 Some sort of Alpine bird you see a lot around these huts. I saw a dormouse too! 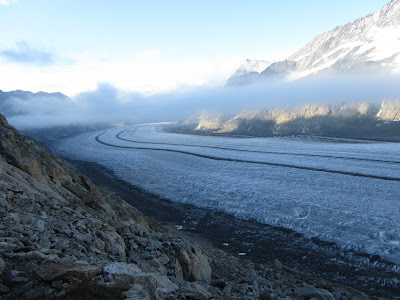 From the hut you could see the Aletsch glacier snake its way through the valley
I didn’t sleep very well that night. Maybe it was the thin and dry air. But the view was enough to keep anyone motivated, regardless of their sleep record. We were on our way early, and we started out on a very even part of the glacier, meaning we didn’t initially need the rope. Freedom for taking pictures! Nice, given that the glacial streams, glacier tables and middle moraines were very photogenic, especially in the continuing sunshine. 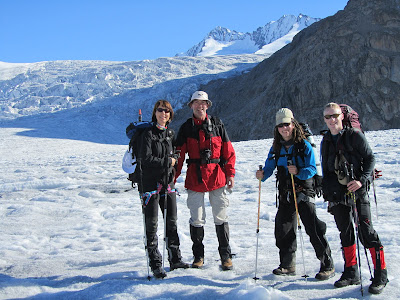 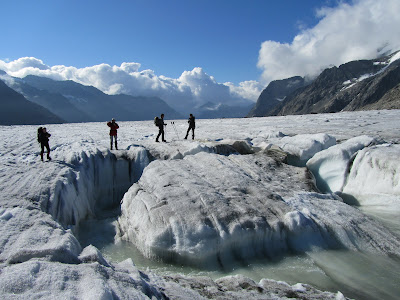 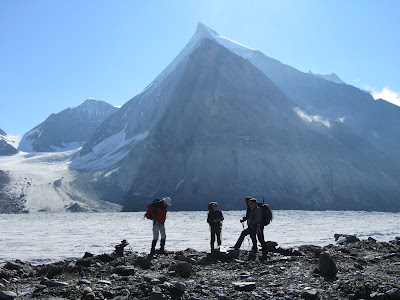 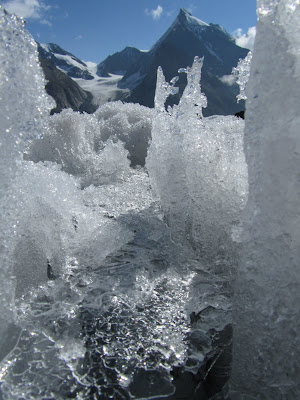 After a while we reached the part of the Grosser Aletschfirn with crevasses; that meant back into the rope. We could by then see a small blob on the horizon that was the next hut, and menacing clouds piling up behind it. These stayed there, though; we continued our hike though sunshine in a white world. Soon we were at the hut; 20m away from it Gordon found his last crevasse, and then we were in. This hut was standing in the snow, so I could have me a proper snow shower (to the amazement of the others), and of course the after-hike-beer wasn’t lacking. As we had started much earlier than the previous day we were in much earlier as well; there was time for drinking Apfelpunch, reading, writing letters, playing Cockroach Poker and whatever else we felt like. It was very cosy! It got even cosier when it started to snow. Inside it was warm and dry. And we were already halfway down the trip... to be continued! 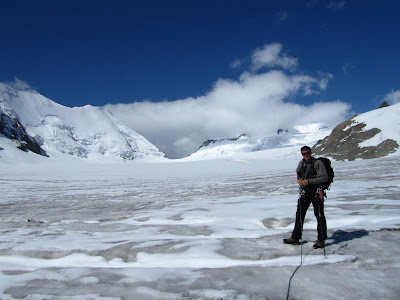 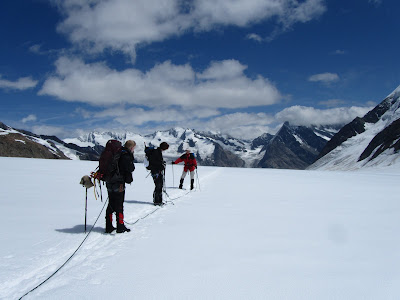 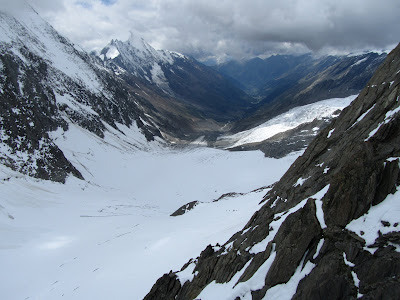 The view from the Hollandia Hut 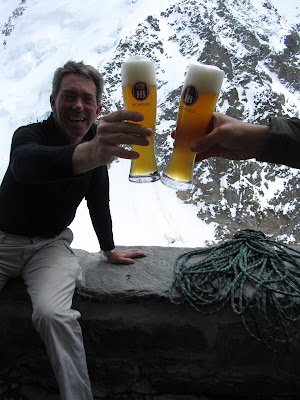 Stephan and Stefan know how to celebrate arrival 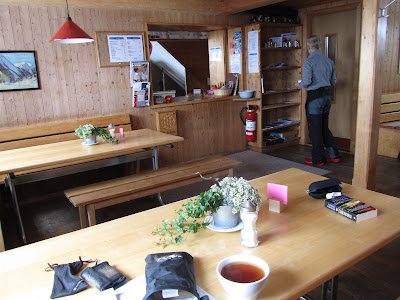 A warm bowl of Apfelpunch in the cosy hut 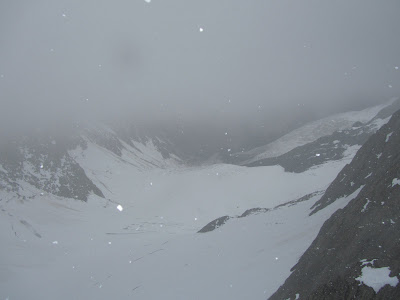 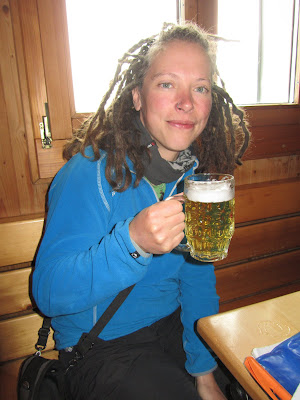 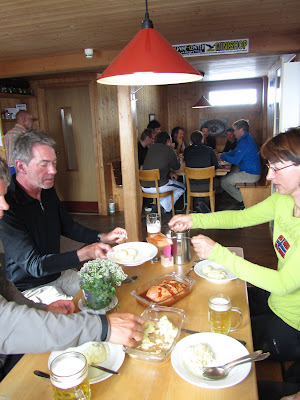 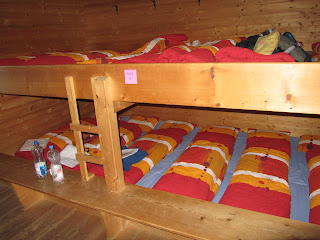 Well-organised sleeping quarters... of course, we're in Switzerland!
Posted by Margot at 18:41