Throwing stuff away? Bring your car...

I’m a hoarder. I can’t throw things away. And it’s a burden. I have been trying over the decades to somehow re-mould myself and learn the art of keeping your material possessions to an acceptable amount, but it’s a slow process. Yet some progress is made...

Recently I had an extra burst of annoyance at all my stuff. And I want to engage in a new offensive against it. One small step in this greater whole is that I figured I should get rid of my copper. No not of a police officer (I have none); a few kg of scrap copper. I used to work with that back in the days; making cheap-ass replicas of ancient jewellery with it. But I haven’t done that since I left the Netherlands. And I should get rid of it. 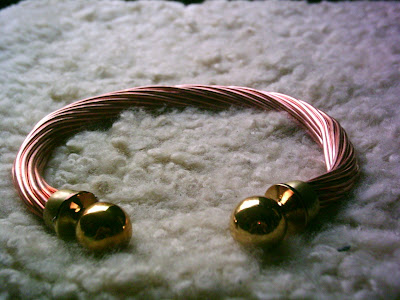 The sort of things I'd make of the copper
On a fresh Saturday morning I stuffed the whole clump in my rucksack and biked to the industrial estate on the outside of town. I went to a scrap yard I had biked past many times; all well, it was open, and there was a young man manning the reception. But when I asked him if he accepted old copper (he’s representing a scrap yard, so why wouldn’t he?) he asked to my surprise if I had come with a vehicle. I said yes, I had brought my bicycle. And then to my even greater surprise he said he couldn’t accept anything from anyone who came without a car. He needed a registration number, and the one of the car I had left at home wouldn’t do. And I assume these rules would have been imposed onto them from above, and it wasn’t just him engaging in spontaneous cyclist-bullying, but I wasn’t too pleased. Would I really have to bike all the way back with the stuff on my back, drive back, deliver the copper, drive back home, and get back onto my bike for the rest of my shopping? Ludicrous!

Luckily I wasn’t the only person trying to get rid of some metal. I just asked the guy who appeared behind me, and who HAD come by car, if he wanted my copper. That way it would be according to the rules... He said they weren’t going to pay him for his stuff today, so he couldn’t pay me. I was mainly interested in getting rid of it, so I said he could just have it. The copper price is pretty high, so the guy felt a bit burdened by the deal, but he accepted it. He said if he would ever come across me in a pub he’d buy me a drink... 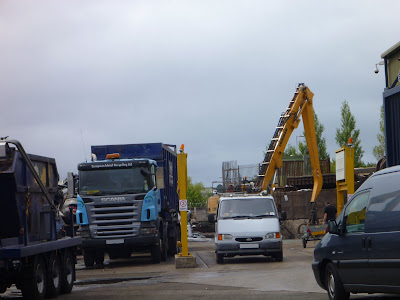 The entrance to the scrap yard
Evidently, throwing things away isn’t as easy as it seems! But I managed. Let’s see what more I can do. I made an eBay account and will try to sell some stuff I really don’t want to just bin... one day I might have a tidy, empty-ish home!
Posted by Margot at 12:51