This advice came from one of my most elusive running mates ever; Will, with whom I had run only twice before he got injured. And even though that was a while ago, he still wasn’t back to normal. He should have competed in the Plymouth Half Marathon, and he should have run the Totnes 10k himself as well, but it wasn’t going to happen. I still took his advice to heart, though, and I had subscribed.

It felt a bit strange. I had only just come back from Switzerland, and I hadn’t run for a month, as I had to drag both conference kit and hiking paraphernalia to the Alps, and it all still had to be packed in manageable luggage, so there was no room for running shoes and the likes. Oh well. My physician had, when I asked her about my ankle injury, already said that if I could run a half marathon I could just bluff my way into a 10km race without doing any training…

I pinned my race number to my shirt in the train. The start was just beside the station, so I got out of the train, walked a few minutes, gave my bag to two very kind elderly ladies who manned an improvised cloakroom, and then I was ready to go!

I did some stretching, and close to 11AM I went to the start. I was recognised there by some very tall university employee; nice to see someone familiar! 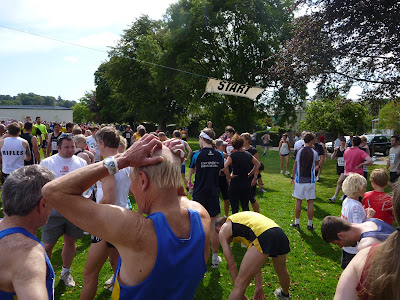 This race only had 500 runners, so as soon as the signal sounded we could all run. And we were off! The first bit went over bike tracks, but soon we were in the fields, on a narrow path along the Dart, and in the woods. There was a fresh wind, we were refreshed by one rain shower, and beside that there was just sun. 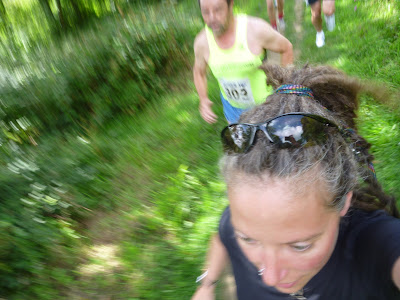 On these narrow paths you can often only run at the speed of the one before you, but I didn’t mind. The atmosphere was good, and at some point I was chatting with the lady behind me for minutes before the path widened, and we could actually look each other in the eye.

The tall Plymouthian was not far in front of me. Somewhere halfway the race I found him stretching against a tree; would he have had cramps? Having long legs doesn’t always make you fast, apparently!

There were steep bits in this race too; at some point almost everyone in sight was walking. I refused, but that took me all the breath I had. 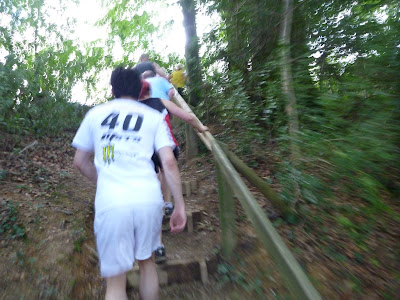 This isn't even the steep bit; there I was too out of breath to take pictures...
It was a 10km race, so I was surprised to see the 1 mile mark after a few minutes. Why would I want to know the distance in miles? But this is England… the 2 mile sign followed soon, and the 3 and 4, and then I knew I was more than half way. I was looking forward to the 5 mile sign; that would be ¾ of the way! But it was elusive. When I still hadn’t seen it and already could hear the finish I figured I’d missed it. 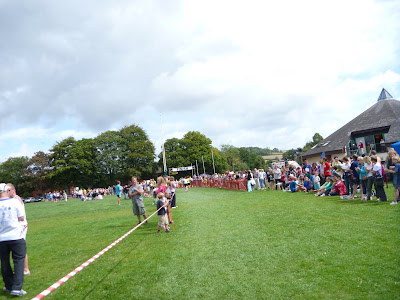 Finish in sight!
I did some modest acceleration when I knew I was almost there, but I hadn’t saved myself as much as during the Plymouth half, so I came in at modest speed. My time was 56.25; not bad given I hadn’t trained! I got my medal, got a hug from the woman I had been talking to earlier in the race, and then I made my way back to the railway station. A hit-and-run race if there ever was one. But it had been fun, and this might help get back into a running routine. I want to do another half marathon! 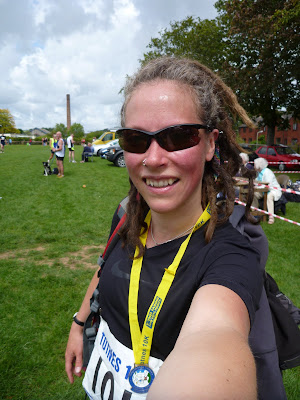