The next step is a straight jacket! This running thing is going out of control. It started with an innocent pre-lunch run. Then there were some evening runs. Then I found Pete, to run with on a regular basis, and that helped. Then Will the Tornado joined us. Then Will contracted an injury and Pete immersed himself in self-torture loosely disguised as football, to which he (temporarily) sacrificed the running, so then I started running on my own. That went well! So I wanted to perhaps do a somewhat longer run in the weekend.

With Neil I had run a few times around Burrator reservoir. First two rounds, which worked, but took its toll on my knee. And then Neil did two while I pulled out after only one, as my knee this time agreed even less with the incessant asphalt. So I figured running was perhaps OK, but not such distances on a hard substrate. But I had heard he now ran off-road as well! So I mailed him to see if he was doing anything fun. And guess what he had scheduled. Around Burrator reservoir three times. I should know better! I didn’t know better. I committed.

We had accidentally picked a beautiful day. We started calm; 21.6 km is very far. After the first round I was still fresh. The second one flew by like nothing! I didn’t even hesitate to start a third round, though some tendon in my left groin had started protesting. And my feet were tired. But we just went on, and it still was going well, though every step now was one step further than I’d ever run before. And I started to feel it! Somewhere quite a way into the third round I felt my speed dropping off. Neil was so kind as to run some loops so he wouldn’t run too far away from me. And near the end my right knee started protesting too. And my spleen. But I ran on, and to my surprise I got back to the car quite fresh. A half marathon done, for the first time in my life! And I had looked at my watch; we had needed only 1h55. Not bad at all! And as NeiI’s route includes some quite unnecessary hills it may be a harder route than the actual Plymouth Half Marathon. I evidently can do these things! 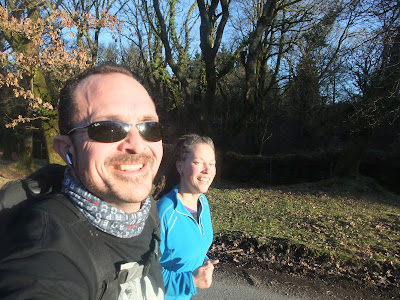 Looking fresh during the fast second round 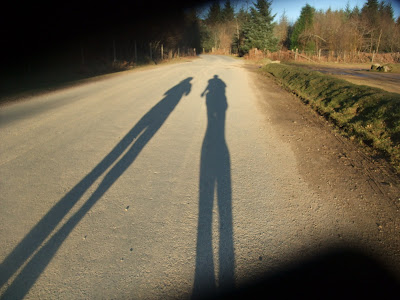 The low sun turned us into long-legged giants! 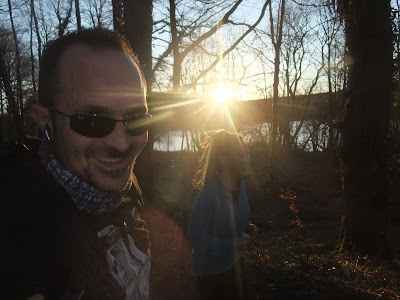 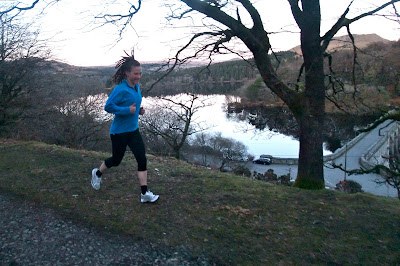 Me in the final few hundred metres; the strain is beginning to show! 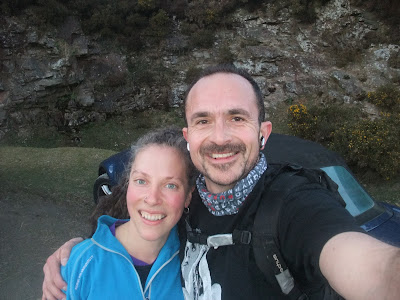 And done! Looking fresh as ever...
When we were done I needed some stretching, and I was hungry now, and I also got cold quite soon, but hey, it could have been much worse! My knee, spleen and groin seemed to think that with the running done, complaining wasn’t necessary anymore, and I walked around without the slightest limp.


When Neil was done with his cool-down we went to his place for a shower and some splendid grub. And some ogling of tin; you can’t visit Neil at home without some of that. And some Belgian beer. And when it was all done I even walked (!) home like a veritable doe. A good day! I think we’ll do something of the sort again someday soon. And I have clearly been properly bitten by the running bug now. Who would have thought. Not me!

Ps
Neil predicted I would get wild reactions when confronting my colleagues with my achievement. And he was right! Rob’s reaction made me so proud I cannot resist the temptation to share that. And mind you reader, Rob is a young, tall lad, who works out a lot, and who doesn’t count anything as a work-out if he doesn’t have to be treated for shock caused by bleeding from all sorts of burst blood blisters and worse wounds afterwards. So he said: “I’m surprised to see you aren’t suffering for it! I couldn’t walk for days afterwards!” And when I pointed out I was tired in the legs the day after, and had needed 10 minutes more than him, he wasn’t convinced. He called me superhuman! The fittest bloke in the world calls me superhuman. Blimey. And he said “if you train for a half marathon, you don’t do that by running a half marathon! You run about two thirds of it in training, and then on the day itself you run the whole thing on adrenaline. You don’t just churn them out like that! It’s not how such things are done!” I was really, really chuffed after that. Thanks Neil and Rob! Had a big smile on my face the rest of the day…

pps
I am short of faith, so when everybody indeed thought I had run like mad I checked the distance, which Neil had claimed was 21.6 km, though he'd express it in miles, on Google Earth. By my measurtement we "only" did 20.6 km, which is a few hundred metres short of an actual half marathon, but it's still very far! I'm still proud.
Posted by Margot at 08:53