Some don't like dangling from a rope above a gaping hole. Some do. Some specifically request trips that involve such to be scheduled when they're available. And so we gathered on a Tuesday night with six eager people. We kitted up and went to the shaft. I did a small cool-down in the river (was wearing a wetsuit again) and then I was ready for rope work. So far all good! But that shaft emitted a distinct odour of decaying flesh. Not so good...

Ali was unabashed and rigged the shaft. A special rigging today; we installed both a rope and an electron ladder (or rather, two attached to each other, otherwise it wouldn't be long enough), as we wanted to know if ladders provide a reasonable alternative to SRT or not. As soon as all was ready Richard, who seemed to hardly notice the smell, went down. Seconds later he confirmed the presence of a dead sheep at the bottom of the shaft.

I went down second. And the smell hardly got worse! Then Ali appeared, and soon after I heard him shout up "OK, see you at the pub!" Evidently the other three thought the stench was so appalling they preferred to retreat unsatisfied over exposing themselves to this fragrance any longer. Which was somewhat poignant as the three deserters were Mike and Jenny, who had asked for this trip to be moved so they could come, and Bernard, who wanted SRT practice, but had decided against it on the previous trip, and was all fired up to give it a go this time. 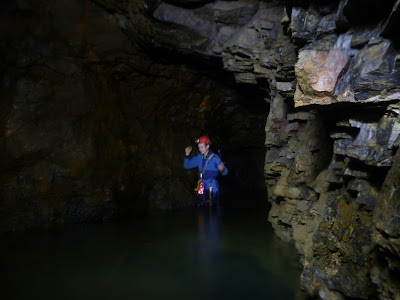 Richard trying to not move for 15 seconds, with a flooded winze in front of him
We went into the sheepless side of the mine; I hardly remembered it from the previous time. Good to come back! And for several reasons; one was that there is one hole with a note from our own club that it’s dodgy in there, and it’s not recommended to go in. That it is dodgy, however, may just be a reason to go in anyway; Ali said the roof in there had been collapsing and collapsing and collapsing, and by now he thought it might actually almost reach the surface. He wanted to survey it to find out how much rock there still was between the stope and the surface. If that would be minimal, it may be time to warn someone! So we ignored the note, went in, found out that the surveying equipment wasn’t working, had a look around, and quickly went back. But the difference between the description Ali gave of what it looked like the first time he came there, and the lofty vaults we saw, was quite impressive. 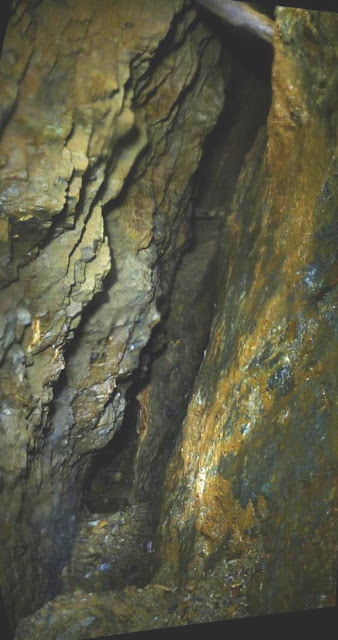 The very narrow, but very high, unstable stope
Richard had had enough by now. Maybe he just didn’t want to get past the carcass. Ali was ready to leave too, but it would take them a while to get up the rope, so I figured I’d go into the sheep-containing side as well. Passing the sheep I had a better look; this animal had two rib cages. Strange. Or rather, it was two of them! At first glance it looked like a sheep in loving embrace with a sheepdog. What stories are contained in such a configuration! But I didn’t linger; I walked into the deep and cold water I remembered from the previous time. My favourite! And the reason I had put on the clumsy wetsuit. So I went in, and swam to the very end. Very nice! 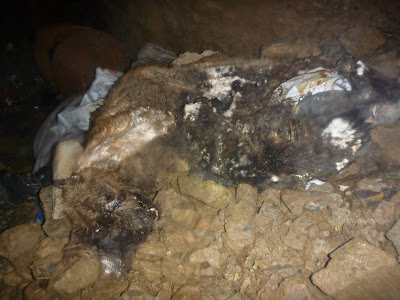 Our smelly friends
When I came back to the rope the men were both up. It turned out they hadn’t used the ladder; the rope, which we needed as a safety rope, was rigged so that it would actually pull you away from the ladder. I wanted to know if a ladder is a feasible alternative to SRT anyway, so Ali did some quick re-rigging and up I went. Blimey! It’s good I’d been training my arms. I’m not used to electron ladders, so my technique was inefficient, and that way climbing up these 20m was way, way harder than just prussiking up. When I reached the edge my arm muscles were numb. Any novices who want to avoid SRT will probably be as unfamiliar with ladder-climbing as I am, so they would probably wear themselves out as much as I did! Not a good alternative, then. Now we know.
We de-rigged and went home. And normally Dave is the unfortunate one who ends up taking the dirty kit home and cleaning it, but this time Ali and I divided it. I took the ropes. Luckily they were not sheep-stained! So I dared shove them in the washing machine. The first time I got such a load. Two days later I would deliver it back to the store, clean and coiled. And two days later I also had a first good look at the pictures. That sheep had impressive fangs... it probably had been two dogs! Made me realise the danger of seeing what you expect to see. An unexpected wake-up call, given where and when I got it, but always useful for a scientist! 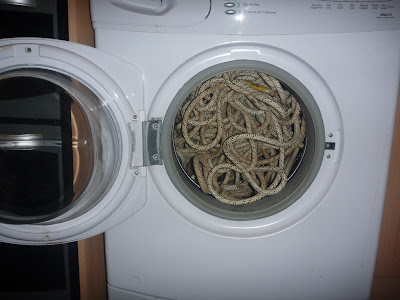