Office? No, the sun!

I think one full-time job is enough. Unfortunately, in science, these jobs tend to not be finished once the contract runs out. So you end up finishing your previous jobs beside a full-time position. Not ideal! But that's how it works.

I still have some manuscripts to send into the world, from my previous jobs, and I want to get it over with, so I aimed for a weekend in the office. Until I got a message from Emily, who has moved away from Plymouth, but who was in town for the weekend. She suggested going for a coffee, and that of course was a good idea! I suggested the Hoe; a marvellous suggestion if I may say so myself. So we had coffee in the sun, overlooking the sea! What more does one want. A good start of the weekend, and one that gives one strength to then go to the office and work away a sunny day after all! 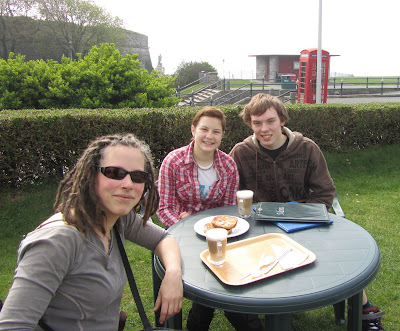 The picture is too over-exposed to show the sea in the background, but trust me it's there!
Posted by Margot at 18:17