The best biking helmet is a mining helmet. That is, at night and on unlit tracks. And this week we went to Radford Cave, in Radford Park, which is unlit indeed. And the bicycle path to and through it partly follows an old rail track, so it slopes only gently, which makes it a very attractive route for the lazy cyclist. So I’d biked there many times, only lit by my bike light, which is only JUST enough to not bike into a tree or into the estuary. But as I now had all my underground kit with me anyway, I put on the helmet upon entering the park. Marvellous! It must have looked odd, but there was nobody to see it.


Radford Cave is a nice nearby treat, with lots of possibilities for scrambling fun. I remembered struggling with the trickiest bit the previous time we did it, but this time I was up in no time! This made me somewhat overconfident, for soon there appeared a passage one could try at three levels; Over, through or under, where under was the most challenging option. Richard, our Racing Snake, tried it, but decided against as it was too tight. And a good rule of thumb is: if Richard can’t get through, don’t even think of trying it yourself, but I was being silly and tried it anyway. To no avail, of course, but the same holds for Rupert trying to photograph this defeat. But I had the bruises to still enjoy it the days after! We didn’t play around for too long, though, as we knew there were people waiting for us. 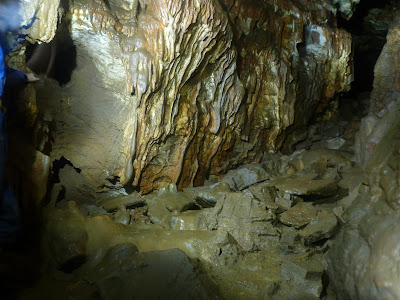 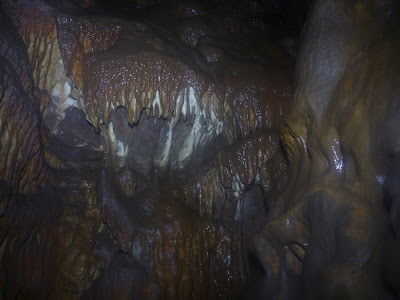 I delayed us a little bit by going the wrong way, followed by an indignant new member that thought I would know where I was going, but soon we were out anyway.

The helmet did a good job on the way to the pub: more unlit roads! These are adorned with vicious speed bumps and treacherous potholes, so more light was no unnecessary luxury. It worked out well! And I think that next time I’ll bike to Dave to hitch a ride I do the Radford Park by Mining Light trick again...
Posted by Margot at 18:20