I said once the English will not exercise unless for charity. Whether true or not: I have something to add to it. They wear plastic flowers for charity, too! Even foreigners must have noticed the poppies on everybody's lapels in the period before Remembrance Day, which is November 11th. The Royal British Legion, an organisation that supports those who are or have been in the British armed forces, and those depending on these, organises this so-called poppy alleal. Most support goes to those in most need of it: those that have sacrificed their health to service. The idea is that you buy a poppy for whatever you wish to donate to this charity, and wear it as a sign of support. Everybody wears one, so everybody who watches BBC (all the Dutch, for instance!) notices the phenomenon.
There is a new flower in town! At least, it was new for me. Suddenly there were plastic daffodils (the national flower of Wales! But that may be a coincidence) for sale in the pub; donations went to Marie Curie cancer care. I bought one. I thereby supported support for the terminally ill. And doing so made me feel very English. That can be a good thing! 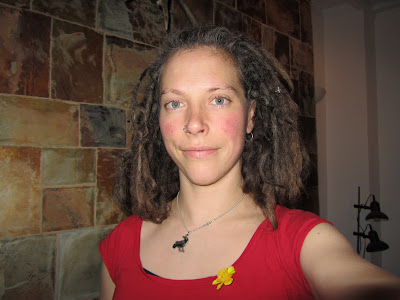