Underground at the beach

Two hours and two minutes. That was the time Google Maps said it would take to the next Cornish mine trip. Far away! But Mark, the bloke who sends the messages out, reassured me it would be worth it; lots of mine to wander around in, some of it unexplored. And lots of it wet. That won me over!

We reached Cape Cornwall; a place of beauty. More information from the guys convinced me a wetsuit would be silly, so I got into my normal caving kit. And wandered onto the rocky beach, where to my surprise I saw what seemed to be thousands of youngsters in helmets. Probably geology students! Contemplating that, I suddenly saw someone looking at me. Richard, one of our lecturers! So indeed it was geology students. But not just any kind: our own! That’s nice. 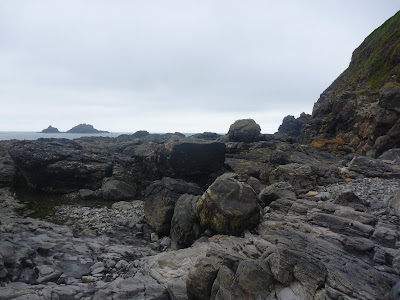 The beach as we found it
We clambered in, and it soon got wet. And crawly, with glass shards. And balancing beside gaping holes. And then a tricky climb; luckily we had Lionel the Fearless to negotiate it, and then fix an electron ladder (a steel wire – aluminium steps ladder) in place so the less adventurous could follow. All good fun!

This mine though ended in a level with deep, cold water. I wanted my wetsuit! But I didn’t wear one, and neither did almost everybody else, so we turned back. I did a small explore with Darryl, but then it was time to come out and have a sandwich. 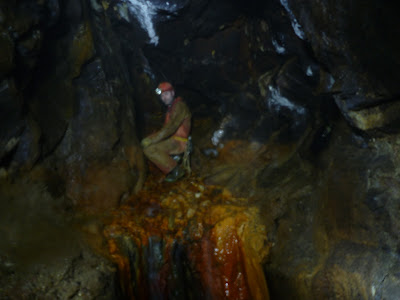 A somewhat fuzzy Darryll at a colourful underground waterfall 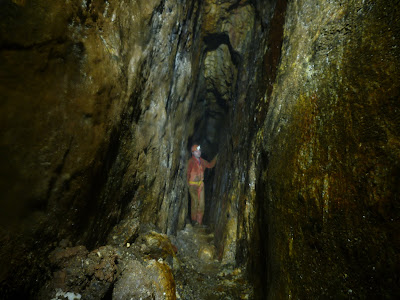 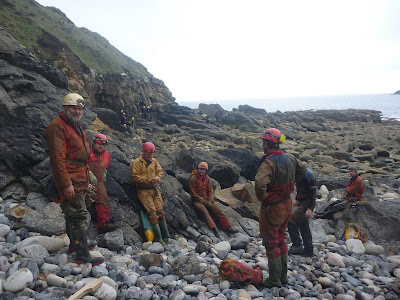 Lunch on the beach! Or the prospect of it. Lionel seems to prefer a rock. Do notice the helmeted students in the background.
As we hadn’t managed to get to the other side of the cape underground we went above ground. This was properly unexplored, so we could expect anything, and therefore I donned my wetsuit after all. And got quite hot walking to the other beach! Luckily rock beaches have pools in which you can cool down. The adit would be in the middle of the cliff face, and cliff faces are not the best places for wetsuits, but we all got there well. This place was quite wet as well! And had plenty of opportunity for playing. 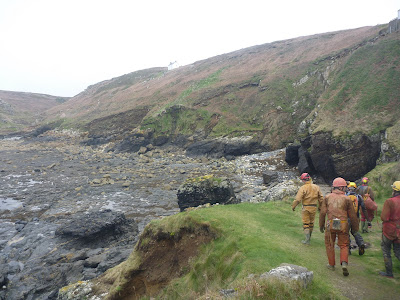 The other beach, here still with low water 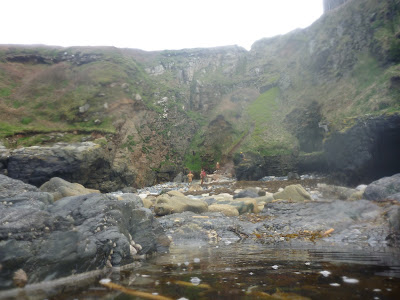 Me cooling in a pond, taking a picture of the men scurrying at the bottom of the cliff. The entrance is somewhere halfway up the cliff face.

And seen from above!
At the end the mine ended in a hole. No way you could free-climb that. But it looked mightily interesting down there! Lionel lived up to his reputation, nicked a plastic rope from the previous tricky climb, and lowered himself with proper contempt for death into the cold water. I was wearing a wetsuit! I should be down there! But I was scared. But after some faffing, my fear of letting Lionel have all the fun without me won over my fear of that gaping hole. I lowered myself too! Straight into Lionel’s chivalrous arms. It’s good to cave with gentlemen. And then we were off! Lionel, who was in his normal outfit, suffered, but I felt like, well, a fish in the water. We explored all the way to the end, chanced a few pictures, and came back. There I looped the rope through the crab on my belay belt, and Mark pulled me out with unprecedented force (I've been pulled by a Cornishman!). And then with a helper he did the same with Lionel. Splendid teamwork! But now it was time to get out. 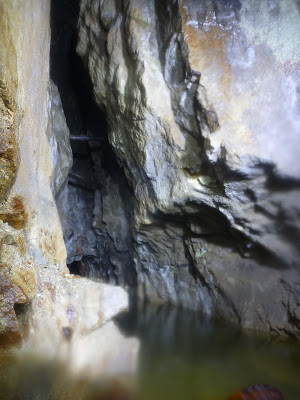 The flooded stope
When I reached the entrance I saw Lionel run over the disappearing beach, shouting at us that we had five minutes. Splendid! We rapidly made out way down the cliff, and over the beach back to the path. The water by then was about knee deep; if it would have been any deeper there would be a good risk of being knocked over by the waves. (Do not fear though, reader; if we would have deemed it too dangerous we would simply have gone up from the mine entrance instead of down, thereby entirely avoiding the beach.) What a splendid finale to a good trip! Mark was right when he told me it would be worth the drive... 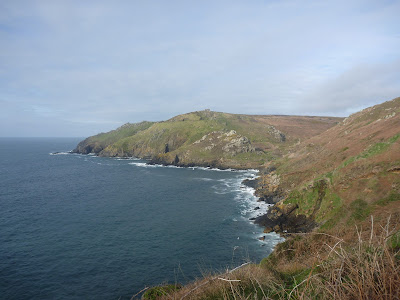 Last picture: the very scenic Cornish coast, with even a nice ruin on the hilltop. And much higher water now!
Posted by Margot at 19:30