Going to a birthday party tends to be fun. Roland made us take it literally. He sent out an invite to the remote pub where he wanted to celebrate it, and had turned the travel there into a pub crawl of its own right. A splendid idea!

He had sent the invite out fairly late, so many people already had other plans. In the end it was only Pete, Sabrina an me, and partially Bill’s extended family, that happened to travel home at the same time, that embarked on the indicated train.

We took the slow, scenic train to Calstock, where we had our first pint. Then we took the bus in the fading light to Metherell, for the second one. When we stepped out of that pub it was pitch dark, except the screen of my phone, where a message from Roland, who was waiting for us in the last pub, had appeared. It read “Come and rescue me. Nobody has turned up (yet)!” He had evidently thought more of his guests’ fun than of his own. Luckily we were nearby, and I was glad to see I could successfully navigate thought the pitch black night, so only minutes later we stepped in, greeted by Roland’s glad face. 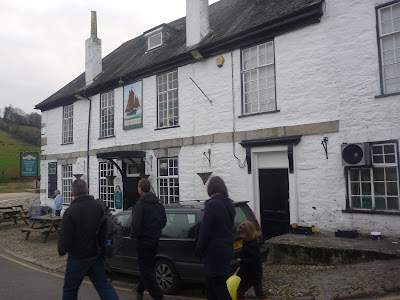 The pub in Calstock. After that it became too dark or too crowded for pictures!
Now it was time for kisses, presents, pints and food orders, while the band was preparing their set. And then an evening of merriment followed! The band, clad in what people tried to convince me were Cornish kilts, played rock classics; the crowd loved it, some barefoot nutter didn’t stop dancing, the beer and the food were good, and a bit later Bill and his wife, and even Jamie, one of our cartographers, showed up. And hardly a mouse could have squeezed into the pub at that time. The whole population of the Tamar Valley must have gathered there!

The popularity of the venue did have a disadvantage; the only way to the last train home was by a taxi of some sort. But these were all taken for hours to come! Roland thought of a cunning plan, and cut his own party short by going home, and sending his sober wife to come and get us. In the train back Pete couldn’t stop singing “Sweet Home Alabama” but even that couldn’t kill the good mood. Not a bad birthday party at all!
Posted by Margot at 18:20