Yes, another caving blogpost! We would visit Virtuous Lady mine, which I had only tantalisingly tangentially visited, so I was up for more. I ended up driving a fellow caver that I hadn’t met before, and soon we reached the patch of dreamy moorland where we would gather. And gather we did, in large numbers!
I remembered driving to the farm with all sorts of stuff on the roof of my car, and all the men having to get out as the holes in the track are just too big for a heavily laden car, so I figured that on this beautiful evening I could just as well leave the whole car behind and walk all the way. Quite a distance, but a pleasant one!

We set off. After a while Richard, who was walking too, said “you just walked right past that adit without even looking!” and indeed, there was a mine entrance beside the path. Emma, another one of the (quite rare) caving girls and me immediately sloshed in. It was wet! And muddy! And collapsed! So we had a ball. And befittingly filthy we continued.

I showed the troupe the way, as I had been there before, but we hadn’t gone more than 20 m before I saw a batch of bats. Bats! We had had some trouble in the club as a dissident voice had loudly claimed we are not careful enough with these, and though one can question whether one should encourage such belligerent voices, the bats shouldn’t be on the receiving side of club turmoil, so I decided to take the cautious approach. The drive over the moors had taught me my passenger was a bat specialist, so I asked him what we should do. He figured we should not go near. Hurrah for mines with several entrances! We went back and took the high road. 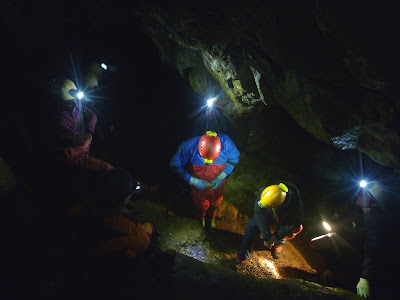 With so many people you don’t even need long exposure times or flash guns...

Virtuous Lady is a nicely confusing labyrinth with several flooded winzes and stopes and whatnot. So we soon scurried all over the place, and I tried especially to take some pictures of the various water bodies. With so many people around it can be tricky to take pictures with long exposure times, as someone is likely to walk through your view with a headlight on. But I got some acceptable results! 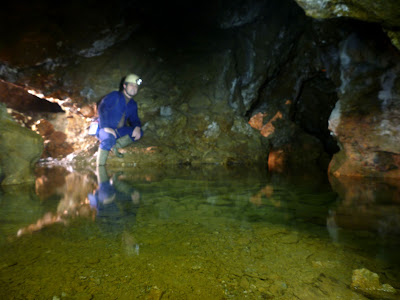 A shallow puddle with Stuart as willing model 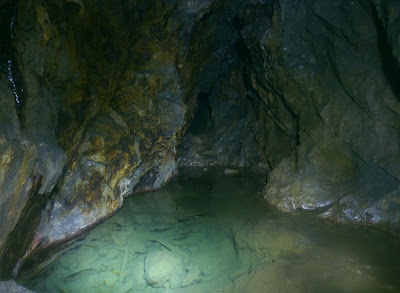 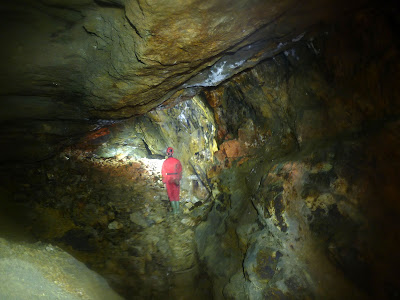 Richard in a messy part of the mine 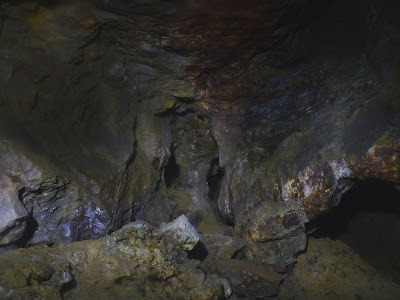 Virtuous lady at her most whimsical 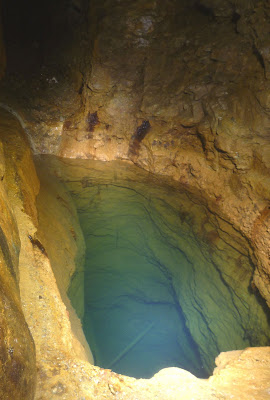 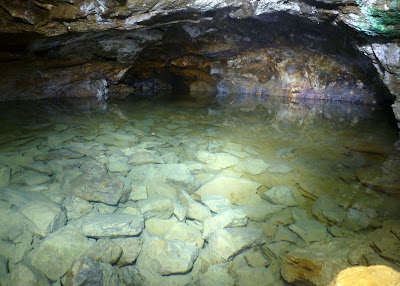 Another shallow pool with pretty blue water
At some point it was time to turn back. So we walked back up the long slope, thereby wetting our appetite for a drink in the pub. They seemed to have “dirty hooker” on draught, but when I ordered one I was too late. Luckily Dave, who was one of the last to enjoy such pleasure, gave me a taste. Quite good! So if I ever get the chance to enjoy both a virtuous lady and a dirty hooker in one night I will definitely do so!
Posted by Margot at 19:41