“As you know, we have your countryman Arnoud Boom delivering the seminar next week. Would you mind chairing (Tim is gone next week)? I’ll meet and greet Arnoud, but as you can understand it would be far more appropriate for him to be introduced by a physical person rather than a mere human!”
I got this e-mail from Federico (for those who wonder why he calls himself a mere human: read this), and when I answered I would be honoured to take that task upon myself, I thought I would indeed just be chairing that seminar, but how wrong I was. By the time afore mentioned scholar took the train back to Leicester my mind had been boggled by hyraxes, oldtimer naval vessels, large fish, fossil urine, muscular snails, old friends, Sinterklaas, and much more.

It started with me e-mailing the gentleman, asking him to provide some information so I could properly introduce him. He sent me a file that made me rush to Wikipedia. He apparently was working, among other things, with hyrax middens. Hyraxes? Never heard of. Wikipedia taught me I had heard of them (klipdassen!), but I had no idea what they looked or acted like. Youtube gave me an idea... they are marvellous! And it seems they tend to relieve themselves in the same place over and over again, over generations, so in the end you have a pile of dried-out hyrax pee, and if you are a biochemically skilled palaeoclimatologist, of a palaeoclimatologically skilled biochemist, you can deduce all sorts of information form that. Amazing!

When the man arrived in town I joined Federico and Tim, who organise our seminar series, and of course Arnoud, for a beer and dinner. We went to a sea food restaurant, where Tim and Federico had fish & chips of such ridiculous size it merited a picture. I there learned Arnoud actually is the co-owner of the steam boat of Sinterklaas, and that it’s actually an old British marine vessel, having something to do with torpedoes. Blimey! 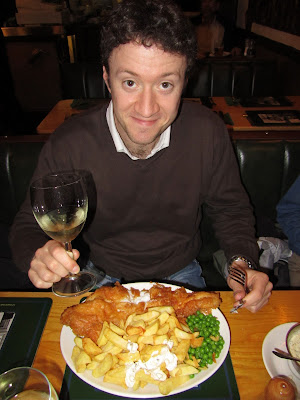 Tim attacking his tiger shark-sized deep-fried fish
Then the next day there was the talk. The second slide brought me back to Amsterdam. Wesselingh, 2009! He used material provided by good old Frank! That’s a trip down memory lane. Third slide: Kaandorp, 2005. Later I heard he had also had discussed collaboration with Hubert, with whom I had done belemnite work in the distant past, of which the concomitant manuscript should be in review now. 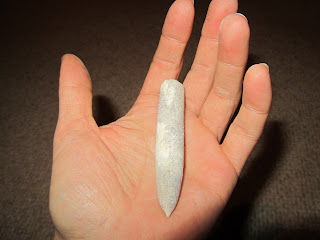 A left-over belemnite from my Amsterdam work
One thing he had needed Frank for was the identification of a massive tree snail. It must have been about a foot long, with a 1cm thick shell. It must have been massive! Imagine that falling on your head. And imagine the snail then having to haul that shell all the way back up.

It was a good talk! I hope I get asked to do that more often... you get much more than you bargain for! If this was representative...
Posted by Margot at 11:27