Stand and be counted! Me, and about 30 million other UK residents, were called to represent. And represent I did. In the UK, the government organises a census every 10 years, and the changes that brings to light tell a lot about what's going on in the country. They started this tradition in 1801, when there were fewer than 10 million Britons. 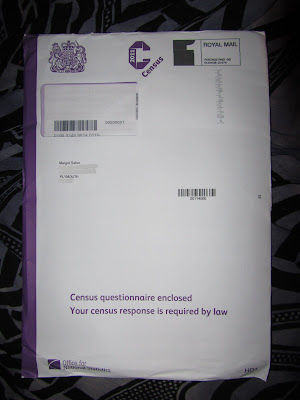 So what is it they want to know? How many people there are in your household, how many rooms your house has, what kind of a house it is, how many cars you have, what your qualifications are, what sort of job you do, what your marital status is. Very factual stuff! I was surprised to see that they also ask how healthy you are, and if you care for any relatives or others that can't cope alone. And how well you think you speak English. (They only ask foreigners that, of course!) And the most famous one; where they ask your religion, and where hundreds of thousands of Brits jocularly said "jedi knight".

From comparing all these censuses (seems to be the plural) they can evidently trace all sorts of societal changes. One can easily imagine which. There was an entire (and interesting!) programme on TV about it. But the thing that struck me most was not a change but a phenomenon. It seems that in Glasgow the difference between life expectancy of the well-off and that of the not-so-well-off is the biggest in the country: about forty years! And it's so big that of all the western countries, only the USA can match that. The class society is not dead yet! Typical...

I do like the idea that I am part of the 2011 data. Maybe I'm typical for the times; a single, highly educated, healthy female, who keeps all her time for herself and doesn't care for anyone less fortunate. Then again; I'm a foreigner, so all my old time friends and relatives who could end up needing care live at least one country away. But we'll see what they find in this batch of data!
Posted by Margot at 09:02