Women and the Great Strike

After several online lectures to celebrate Bethesda's bicentenary, I saw another lecture advertised. It was organised by Llandudno Museum. It would be about women in the Great Strike. I was interested!

It turned out this talk was based on the undergraduate dissertation of the speaker. Quite something to give a public lecture about it!

It was an interesting talk. The whole problem with this sort of topic is that, at the time, few people would have found what women did, said and thought very interesting, so it wouldn't be documented very well. And the archives are full of old newspapers, but these would all have been written by men, and might provide a bit of a biased view. And the woman had had only the amount of time one is supposed to sink into an undergraduate dissertation to dig around in it, so it was undoubtedly not the very last word to say about this. But it was a good start to redress the balance!

So what had she found? I already knew that there had been instances of strikebreakers having to walk past crowds of women shouting abuse and possibly throwing stuff at them. That was already publicised back at the time. But she had found more. I knew about male choirs travelling the country, fundraising for the strikers, but she dug out a female choir which had gone around the country and raised considerable funds. She also mentioned newspapers reporting that if families were having hard times, this would be the fault of the woman who would spend the man's wages on fripperies. She said she had found no evidence of that being true.

Another woman she came up with was Florence Dixie; I had not heard of her, but she was distant relative of the big bogeyman of the conflict: George Sholto Douglas Pennant. She had written him letters in which she implored him to, basically, not be such a complete bastard, but that clearly hadn't helped.

Another thing she came across were women who had moved to south Wales, probably to follow their men who had found a job in the coalfields there. They complained that their children grew up with southern habits. I suppose the clear difference between Gogs and Hwntws was established in the very earliest 20th-century already! But my guess is, that it might be as old as there have been people in Wales… 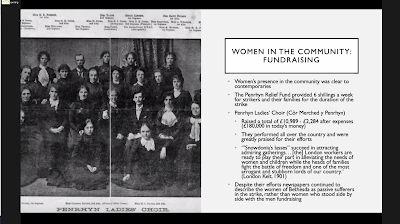