This entire village shows its existence to the local slate quarry. I like learning about it. And the quarry had a hospital; I found out about it before I lived around here. It is now a ruin among the trees.

I noticed on the village Facebook site that someone had written the book about it. And I decided to buy it. I would learn more about the local history! And I would be supporting the local economy. It was on sale in the little shop around the corner, where they sell local stuff.

The book reads smoothly, and is littered with pictures. Quite a lot of them are repeated. The book really goes into an anorakish level of detail. For instance, it shows a series of pictures of a particular window frame in three different years, to show its slow decline. It specifies in what period the lintel came down, for instance. And that is the level of detail all around! Most of the pictures are of the actual ruin, as there are barely any pictures of the building when it was still intact. There is a famous picture of the front, with some posing patients. And a few pictures of a later period, when it wasn't a hospital any more, but a residential building. Most of these are family snaps where only by accident some bits of the building are in view. The author did not manage to govern any pictures from the inside. The only interior pictures are from the hospital of the quarry in the next valley: Dinorwic. That is now a museum, hence that pictures are available.

After starting reading the book, I had another look when I was in the area anyway for my run. They are erecting a fence around it; I think they are increasingly nervous about the state of the building, and want to avoid people going in and getting another lintel on their head. I don't think they will work, but I suppose that if I want to see any of the features pointed out in the book for myself I have to be quick! 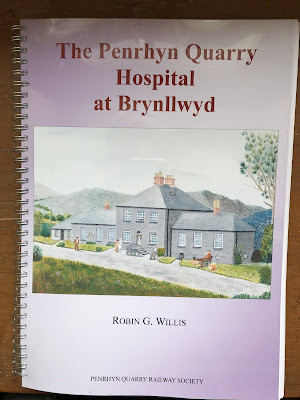