Having a motorbike guest

I didn't only have a lodger cat! For several weeks, I also had a lodger motorbike. I didn't mention that, as I thought it may be best not to alert people to the motorbike in my garage, even though it wasn't expensive and it doesn't work. But now it has left I am happy to tell everyone about it!

So how did I end up with a motorbike in the garage? Well! My friend Kate drives a motorbike, and she would like to know more about maintaining them, but she is not so keen on learning by trial and error on a perfectly fine specimen. And then she found a rusty old broken down motorbike for sale a stone's throw from where I live. So she decided to buy it! She could happily take that thing apart, and if she wouldn't be able to put it back together in working order then that wouldn't be an issue. But motorbikes are big heavy things! They are best transported in a van, and she doesn't have a van. Hence the suggestion she just wheel it into my garage for now, and retrieve it when she has sourced a van. So that is what we did! So suddenly I had a motorbike in the garage.

So how does the story continue? She would just get a van and pick it up, right? Well, no, not quite. She had some annual leave lined up so she wanted to make a start. Vans seemed to be hard to get by, though, so she suggested she just come over with some spanners, and just remove some portable bits she could start working on. So she duly arrived with a toolkit and started loosening bolts. But then she wondered whether maybe we would be able to fit the entire motorbike in the car after all. We could just remove the sticky-outy bits like the mirrors, and see if it would fit! It's a heavy thing, but I suppose both of us have managed to manhandle heavy things into vehicles before.

In the end we used the plank of my work platform as a ramp, put the bike on it, and slid the bike, ramp and all, into the car. The door wouldn't close, but we could tie that closed. Success!

It turned out the trick with the plank worked perfectly fine in reverse on the other side of her journey home. So now she has a bike to practice on! And an Easter holiday period to do it in. All good! 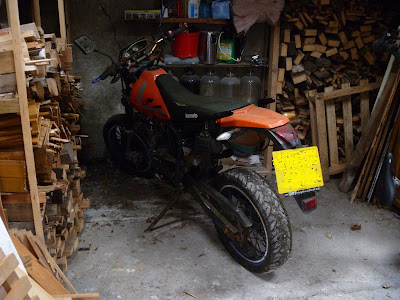 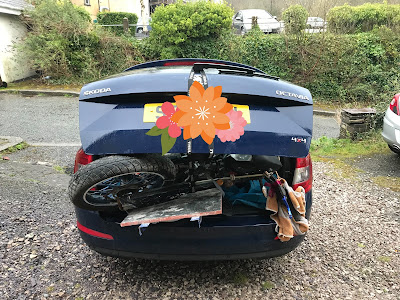