I remember waking up in the morning and hearing on the radio news that the Brexit vote had won. I was disheartened! I really didn't think this was a good idea for anybody. And I still don't think that, but that probably is for another blog post. I also remember at the same time feeling a bit of relief; the Brits had always been such stick-in-the-muds, always wanting preferential treatment, always being difficult. So at least the EU would function a bit less frictionally than it had before, with Britain out.

Then later that year I woke up to the news that Trump had been elected. That was worse! That was only bad. No side dish of relief. And I know I would have to put up with it for four years. And I could only hope it would only be four years! And thank goodness that was how it turned out.

With the day of his departure coming closer, tension was high, because he knew too his days were counted, and he would just be the kind of person to try to inflict as much damage as he could before he would have to leave. And he sure did some damage in the end! Having loads of people executed, pardoning his cronies, inciting a mob that would go on to storm the Capitol. There are rumours of him trying to start a war. But the day came that he would just have to leave the White House and it would all be over! Entirely over? Probably not. But at least this time in office would be.

I made sure I had the radio on when the inauguration took place. And sometimes my Internet, which I was using for listening to PM, is a bit wobbly and creates gaps in the broadcasts when it is buffering. And sometimes my voice recognition software stalls and I have to log out and log in again to get it working again. Both of these things happened! So I got a bit of a fragmented representation of the inauguration ceremony. But it was so amazing to listen to the voices of Harris and Biden, making history by being inaugurated, right when they were speaking them. Hurray! A new era has dawned.

I later watched some of the events afterwards on the BBC website; I was quite impressed (like everybody else in the world was) by the poet. The occasion clearly got to her as well, in the end! And with that, the day I had been waiting for for four years had happened. It would be silly to suggest all is well now, but at least there are decent people in the White House, and that matters, for the entire world. 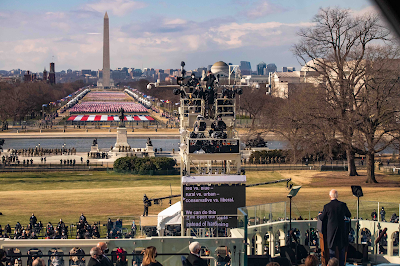