When the University decided it was in financial trouble because of the pandemic, it offered voluntary redundancy to its staff. In the School of Ocean Sciences, two people took it. One was my very close colleague Suzie, and the other one was a biologist I hadn't worked closely with, but who I liked, called Adel. And it was a pity they were leaving during a pandemic! Normally, we have a little function in the coffee room for people who leave, and who are partial to such event. But that couldn't happen. We didn't want to let the occasion go by unnoticed, though, so one of my colleagues decided to organise a little get-together on the beach, on the last day before the Christmas holiday.

The original time had been 11. But on the day before, the message came that the only predicted dry interval was earlier than that, so the time was moved forward to 9:15. Then when I arrived on the parking lot by the beach it was bucketing down. A pity! But it wouldn't stop me. In the room or people it didn't stop. About 10 people, clad heavily in Gore-Tex, appeared. One even carried a baby. And there were four dogs! And when we thought we were complete, we set off along the beach. It even stopped raining quite soon. It was not quite aware of the goodbye to two cherished colleagues, but it was the best we could do given the circumstances. 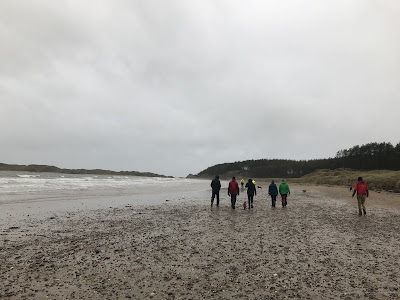 When we got to the landward end of Llanddwyn Island, which most often is a peninsula, but which actually was an island right then, about half the people peeled off. Adel had a ferry to catch, the baby seemed unimpressed by the weather, and a few more such reasons caused people to leave. And with the rest we looped back through the woods.

We lost one more in the woods to his car being parked elsewhere, and back at the cars we lost the last dog-owner as the dog wanted to go home. That left three! Including Suzie. And with that small company we sat down at a picnic table, took out flasks of coffee and tupperware with cake, and had a last chat. It was nice! But the rain was clearly coming in and it was time to go home.

When we get back to work after the Christmas holidays, it will be weird to do that without Suzie! She has been here longer than I have, so it will be strange without her. But we'll cope. And I hope to keep seeing her as a friend! I was never that close with Adel, so she'll just be a good memory, but I hope she'll be happy where she is going.

The next day, a new lockdown was announced, which would come into force that midnight. I was glad we could say goodbye to these ladies in person, as only two days later, an event like that would have been illegal. I hope both ladies are starting an amazing new phase of their lives!